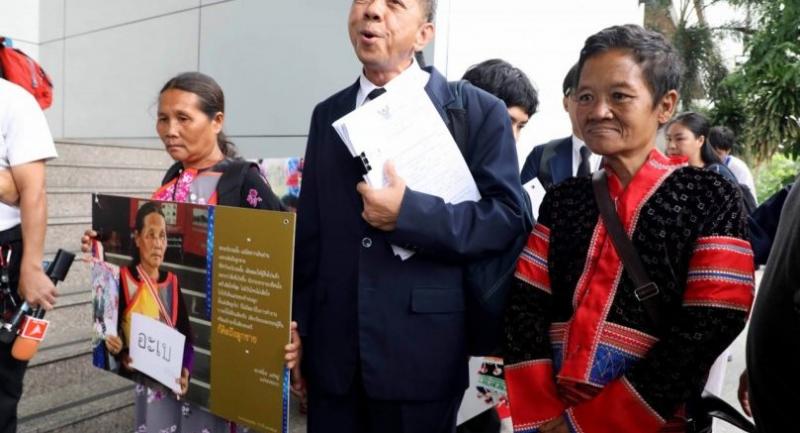 Amema Saemu, left, mother of Abe, and Napoi Pasae, right, the mother of Chaiyaphum, are taken by their lawyer to Civil Court yesterday to file a lawsuit against the Army.

THE MOTHERS of Lahu tribesmen Abe Saemu and Chaiyaphum Pasae are suing the Royal Thai Army for Bt11 million in compensation, as their lawyer is urging the authorities to ensure justice for these Lahu families before the killings begin fostering deep conflicts between the minority group and the state.

Ratsada Manuratsada, representing the families of Abe and Chaiyaphum, went to Civil Court in Bangkok yesterday with Amema Saemu and Napoi Pasae, the mothers of two Lahu villagers slain by military officers in 2017, to file a civil lawsuit against the Army.

Ratsada said his clients have the right to seek compensation as per the Liability for Wrongful Act of Officials Act, under which official agencies have to make reparations for the wrongdoings of their officers. The Chiang Mai Provincial Court had ruled last year that Abe and Chaiyaphum had indeed been shot dead by military officers. He pointed out that Abe and Chaiyaphum had been killed one month apart from each other and that the circumstances in both cases were very similar, in that they had both been killed after being stopped by military officers at Chiang Mai’s Dan Rinluang checkpoint.

Hence, he said, their families had decided to file this case against the Army together.

“We have to take this case to court, because the acts of military officers in both cases are a clear discriminatory action and directly violates their rights,” Ratsada said.

“If the officers are truly guilty, the authorities have the responsibility of compensating for their officers’ crimes, otherwise the affected citizens will feel they are being unjustly treated by the authorities and will start distrusting the state, which will lead to more conflicts.”

He added that the case has been accepted by the Civil Court and that it will forward a copy of the case docket to the Army to notify it. He said the Army had the right to litigate on their officers’ behalf if it is confident of their innocence. However, he said, if the officers are guilty, it will be better for everybody if the Army complied with the request and pays compensation instead of prolonging the court fight.

After filing the lawsuit, Napoi said that though nothing can compensate for her son’s life, she still hopes the Army will make reparations for their officers’ crime, so at least her family can get justice.

Amema voiced similar hopes, saying the compensation will relieve the financial sufferings of her family, as her son had been the sole breadwinner.

Meanwhile, Ratsada has also called on relevant officers to disclose the latest update on the process of filing a criminal case against the officers behind the slayings.

He also asked whether the police had already submitted the case docket with a Military Court attorney, as civilians are not allowed to file a case with the Military Court directly.

He called for the release of a CCTV recording of the incident involving Chaiyaphum at the checkpoint, which has been missing so far.