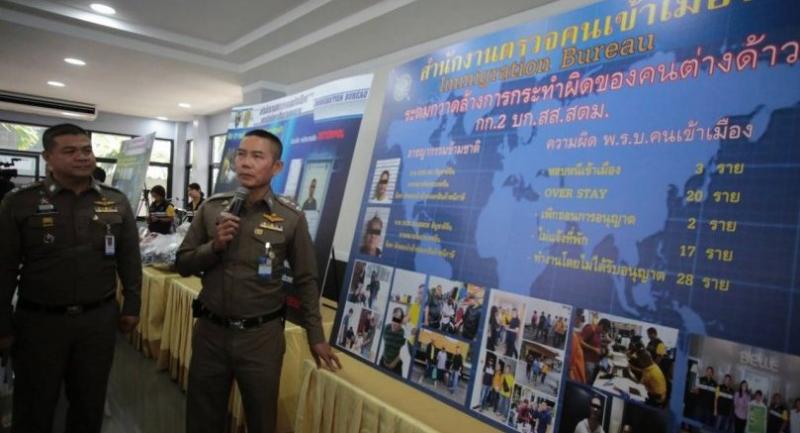 THAI POLICE are continuing to take action against foreign criminals that have been using Thailand as a base for illegal operations or as a refuge from the reach of their own authorities.

Police will tomorrow extradite 15 Japanese men suspected of being members of a call-centre gang, according to acting immigration police chief Lt-General Sompong Chingduang.

Sompong said the 15 suspects were arrested on March 29 at a rented house in the Siam Royal Ville housing estate in Chon Buri’s Bang Lamung district after the landlord reported the tenants’ suspicious activity to police.

Maj-General Archayon Kraithong, divisional commander of the Immigration Police, said officers coordinated with their Japanese counterparts and found that a Tokyo court had issued a warrant for their arrest after the gang intimidated or deceived more than 200 people in Japan into paying more than 200 million yen (Bt58 million). Archayon said the gang would intimidate their Japanese targets, who had bought illegal software through underground websites, to buy e-money cards in Japan and transfer the funds.

The gang also forged fake arrest warrants in order to intimidate some of their victims and that if the gang learned that any of them lived alone, they would send their colleagues in Japan to rob them and, in some cases, even kill them.

Archayon said the 15 men rented the house after entering Thailand in February and March.

He said the 15 had now served jail terms for working in Thailand without a permit and had been blacklisted from re-entering the country.

Meanwhile a Chinese fugitive wanted by Interpol has been arrested at Suvarnabhumi Airport.

Lu Dayang, 48, was arrested on Sunday while trying to fly to Macao.

He said Lu entered Thailand on May 8 on a 15-day tourist visa. The bureau revoked his visa on May 17 and had officers waiting for him at Suvarnabhumi after identifying the flight he was due to leave on.

Thai national security agencies have acted tough on foreign criminals and transnational criminal network members, especially those who have disguised themselves as tourists, following the discovery last year that nearly 100,000 foreigners were overstaying their visas in Thailand and some of these were committing crimes and damaging Thailand’s image.

Those raids brought the total number of locations searched to 7,366 nationwide and resulted in a total of 8,873 arrests.