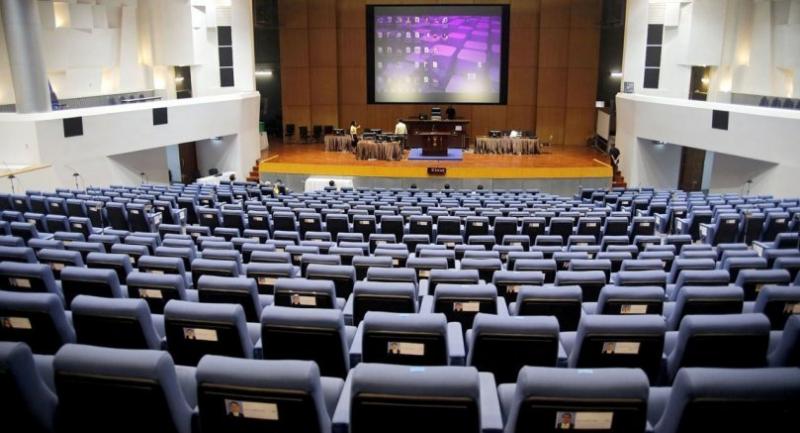 Officials yesterday prepare the conference hall at TOT headquarters for the convening of the House of Representatives tomorrow. The session will elect the house speaker and deputies.

THAILAND SHOULD have a new prime minister within this month, though it will take a while for the new Cabinet to take office, Deputy Prime Minister Wissanu Krea-ngam said yesterday.

Though it has been two months after the March 24 elections, the dust has yet to settle as the pro-junta Phalang Pracharat Party and anti-junta Pheu Thai vie to form a coalition government with both parties almost neck and neck in the number of MPs whose support they claim.

A Phalang Pracharat source claimed yesterday that they had the support of as many as 252 MPs to form the government.

The source had said earlier that its bloc comprised Phalang Pracharat with 115 seats; Democrat Party with 52, Bhumjaithai 51, Charthaipattana 10, Action Coalition for Thailand with five, Chartpattana with three, Thai Local Power with three, Thai Forest Conservation Party with two, and 11 seats from 11 minor parties. The source claimed their bloc will be able to gather 259-260 seats if the five New Economics Party MPs join the pro-junta camp now that party leader Mingkwan Sangsuwan has stepped down, along with two or three MPs from Puea Chart.

Meanwhile, the anti-junta bloc has been further weakened after Future Forward leader Thanathorn Juangroongruangkit was suspended as MP by the Constitutional Court yesterday and will be barred from entering Parliament today. The court accepted a case against him over his alleged shareholdings in a media company in the lead-up to the elections. Thanathorn may be barred from politics for 20 years and may face 10 years in jail.

Once the speakers are royally endorsed, the speaker of the House of Representatives, who serves as Parliament president, will hold a meeting of both houses to choose the prime minister.

The person for the country’s top post will be chosen from parties’ PM candidates’ list and the winning candidate must get a majority – 376 votes.

Once a PM is chosen and royally endorsed, he will form the next government and get his Cabinet to swear allegiance to the country and the King. Then the Cabinet will have 15 days to announce its policies in Parliament, Wissanu said.

Meanwhile, as the two blocs scramble to gather the most number of MPs to form a government, Mingkwan quit his job as leader of the New Economics Party after what he said was an “accomplished mission”.

Mingkwan had earlier thrown his support behind the anti-junta bloc, but now his resignation has raised doubts about whether his party MPs will maintain his earlier stance. However, Pheu Thai secretary-general Phumtham Wechayachai said yesterday that he believes the New Economics Party will keep its promise to join the anti-junta bloc despite apparent disagreements within the party. He said he believes all six party-list New Economics MPs will join a Pheu Thai-led coalition, because previous discussions had included all party members, not just Mingkwan.

Phumtham said he would ask Mingkwan to explain his decision and whether he had been forced to step down.

Mingkwan said he had been responsible for drafting his party’s platform of a new economic system and selling the idea to voters, while other party executives oversaw different areas, such as recruiting new members, raising funds and management.

“Now that the election has been completed, I consider this a suitable time to resign as leader of the New Economics Party,” Mingkwan said in his resignation letter. In the letter, he also clarified that he would retain his party membership and seat as a party-list MP.

It is believed that Mingkwan stepped down due to conflicts within the party, as many of its candidates were demanding that their campaign costs be reimbursed.

One source said that each candidate had spent anything between Bt200,000 to Bt2 million, and won enough votes to garner six party-list seats, though the party failed to win any constituency seats.