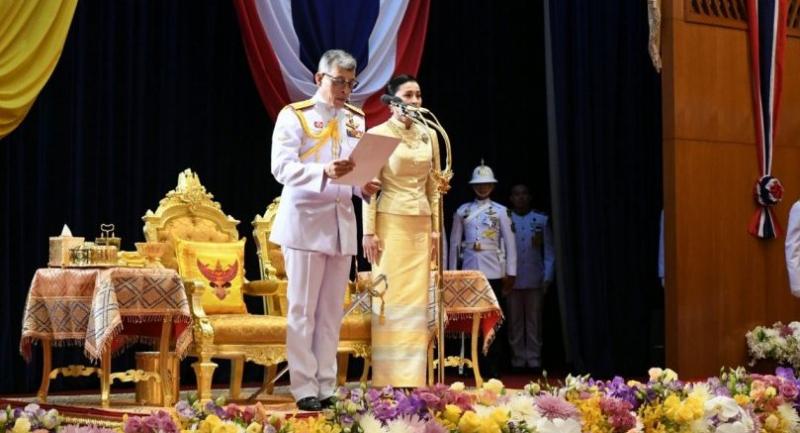 HM King Maha Vajiralongkorn opened parliament Friday five years after a 2014 coup, stressing the importance of "national security" and "people's well-being" as the junta moves within striking distance of cementing its grip on power.

Results of the March 24 poll were released almost two months after the vote and showed no clear winner. But the junta-linked Palang Pracharat won 115 seats in the lower house, only 11 votes shy of a majority in the combined parliament thanks to 250 military-appointed senators.

All eyes are now on mid-sized parties that analysts believe are tilting towards Palang Pracharat.

Wearing glasses and reading from prepared remarks, King Maha Vajiralongkorn told hundreds of assembled MPs standing in white uniform to act with responsibility because "each member's action will directly affect national security and people's well being."

Members of the diplomatic corps were also in attendance.

The king was next to Queen Suthida, a former member of his royal bodyguard unit whom he married days before his coronation earlier this month.

The temporary setting -- Thailand's new parliamentary building is not ready yet -- hinted at the tensions and uncertainty surrounding the rocky path ahead.

Votes for House Speakers are set for Saturday while the vote for prime minister could happen as early as next week.

In a dramatic move a day before the opening, the constitutional court suspended junta foe Thanathorn Juangroongruangkit from parliament as it agreed to hear a case against him concerning the alleged ownership of media shares when he registered as a candidate.

It was the latest move against Thanathorn and his Future Forward party, which shocked the status quo by winning more than six million votes and 80 seats.

But if the court rules against him he could be barred from politics, face jail time, or see the dissolution of his party.

Though suspended he still attended the opening ceremony, but he cannot cast votes in the coming days.

Future Forward is part of an anti-junta bloc that could pose a legitimacy crisis for Palang Pracharat's prime ministerial candidate and junta chief Prayut Chan-O-Cha if he secures the premiership but fails to command a lower house majority.

Despite the messy political climate observers have highlighted positive developments of the vote, including several first-ever LGBT candidates.

Trans filmmaker Tanwarin Sukkhapisit, who was born male, wore a skirt, suit jacket and tie to the opening.

A total of 27 parties also gained seats in parliament.