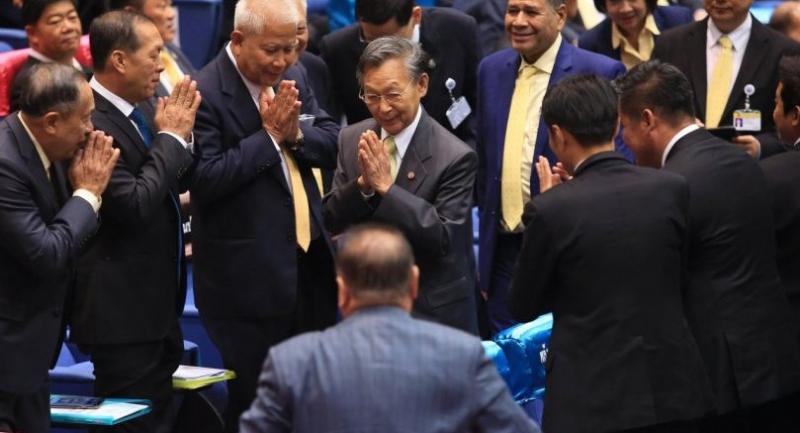 Former prime minister Chuan Leekpai walks through a group of MPs after being elected as House Speaker on the first day of the Lower House meeting on Saturday.//Rachanon Intharagsa

Democrat patriarch and party-list MP Chuan Leekpai was elected the speaker of the House of Representatives on Saturday, after much wrangling between the pro- and anti-junta blocs.

The election of the lower house speaker, the only item on the agenda at the first meeting of MPs, took more than eight hours after Phalang Pracharat proposed a postponement of the vote for unspecified reasons.

There were simmerings of discontent in the pro-junta camp after Phalang Pracharat reportedly wanted to field its MP, Suchart Tancharoen, for the post of speaker but the the bloc nominated Chuan at the last minute.

Pheu Thai MP Jirayut Huangsap objected to the proposal to put off the vote. A prolonged debate between the two blocs led to pro tem speaker Chai Chidchob, the most senior MP and former house speaker, adjourning the house.

After a two-hour break, the house voted on the first motion to decide whether or not to reschedule the election of speaker.

The anti-junta camp, comprising seven parties that had signed a pact earlier, voted against deferring the election.

Finally, the house voted 248 to 246 with two absentions to elect the speaker on Saturday. Some of the pro-Suchart MPs also voted against the postponement.

The Phalang Pracharat-led bloc tried to swing the vote in its favour but failed.

The house hence had to vote to choose between Democrat Chuan and Pheu Thai’s Sompong.