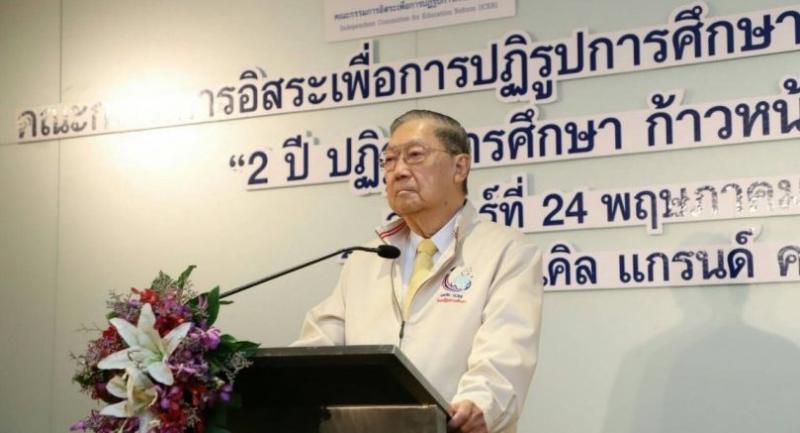 THE decades-long downward trend in the quality of Thai education can be reversed if key proposals set out over the past two years are embraced, members of the Independent Committee for Education Reform (ICER) believe.

“We have already delivered tangible guidelines for the education sector,” ICER president Professor Charas Suwanwela said ahead of his committee’s two-year tenure ending on May 31. The panel has suggested legislation including a National Education Bill, Equitable Education Fund Act and Early Childhood Act.

“We have also identified areas for educational innovation,” Charas said.

ICER was established two years ago to lead education reform efforts. It’s widely accepted that reform is badly needed in Thai schooling. The quality of education has shown little improvement despite more resources and bigger budgets been allocated.

“Over the past few decades many countries have surpassed Thailand in terms of education quality. This trend is unacceptable,” Charas said.

He hopes the committee’s guidelines for reform will improve the sector in the next four or five years.

Charas, preparing to pass on the torch later this week, emphasised that the new government will have to pay attention to problems in education and actively pursue solutions.

“Rote learning prevails in the schools,” he said, and it’s resulted in Thai youngsters scoring below average in tests conducted as part of the Programme for International Student Assessment and the Trends in International Mathematics and Science Study.

Charas pointed out that graduates of Thai vocational schooled were also poorly skilled. “And Thailand’s higher-education institutes can’t compete at the international level either.”

He doesn’t see the greater resources devoted to education translating into better quality, and blames the failure of erroneous attitudes and perspectives.

“Too many Thais still still believe college degrees are more important than individual competency,” he said. “Society also tends to think its the state’s duty alone to provide quality education, while in reality everybody should be contributing.”

“The Equitable Education Fund has already started delivering support to children in need,” he said.

The fund’s administrators have been working closely with the Office of Basic Education Commission since late last year to provide additional financing to students who might have to drop out of school because their families can’t afford it.

Jiruth said the Early Childhood Act promised to ensure that relevant ministries integrate their efforts to provide good care to children from a young age.

“I believe tangible results will become visible soon,” he said, adding that ICER had conceived many good initiatives but was unable to complete them before its tenure elapsed.

“So we hope relevant parties will support these initiatives in the future,” he said.

Jiruth said citizens in general could contribute to school reform by closely monitoring the state agencies and organisations involved in the process.