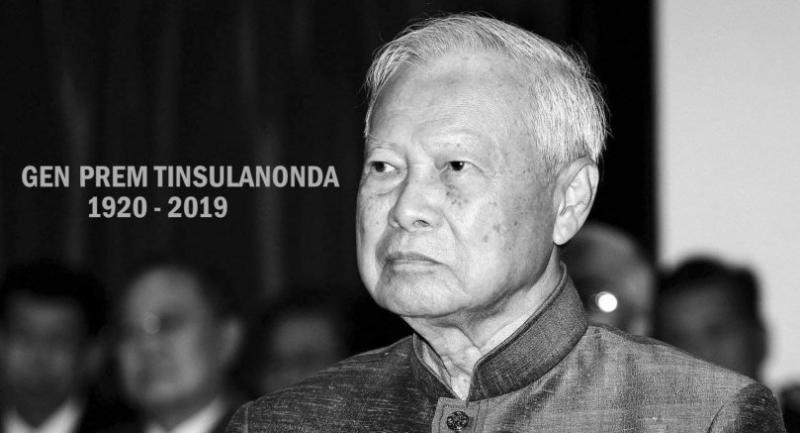 Considered one of the most influential figures in Thai politics

PREM TINSULANONDA, president of the Privy Council and former premier, a statesmen widely regarded as the individual of greatest influence in Thai politics in recent memory, died yesterday of heart failure. He was 98.

Born in southern Songkhla province on August 26, 1920, to a bureaucrat father, Prem made good on his education to climb the social ladder. He attended Maha Vajiravudh Songkhla, Suankularb Wittayalai and finally what became the Chulachomklao Royal Military Academy. Excelling in his studies, Prem said in a memoir he dreamed of becoming a physician, but the cost of a medical education was too dear.

His military education, however, brought him high social status. Ultimately he was chief adviser to His Majesty King Bhumibol and served as regent following the monarch’s death until Crown Prince Maha Vajiralongkorn was formally named successor.

As a soldier, Prem saw action in the Franco-Thai war, World War II and the battle against communist insurgents in the country. His rise to the military elite paved the way for his entry into politics.

When Admiral Sangad Chaloryu brought down a civilian Democrat government in a coup following the massacre of student protesters at Thammasat University on October 6, 1976, Prem said he was unwittingly aligned with the putsch.

He was Second Army Region Commander at the time, overseeing a strategic area where communist insurgents were active.

Prem was named deputy interior minister in the government of General Kriangsak Chomanan and later served as defence minister and Army chief. He succeeded Kriangsak as prime minister in March 1980, remaining in the office for eight years.

He never contested an election, having been invited to serve as premier by elected politicians. Supported by the military, his regime was dubbed a “quasi-democracy” with its elected component. Prem survived two |coup attempts and multiple no-confidence motions in the House of Representatives.

Prem’s tenure as PM ended with the 1988 election in which the Chat Thai Party emerged victorious and voters demanded that the premier’s job go to an elected MP. Chat Thai leader Chatichai Choonhavan got the nod, only to be ousted in the next military coup, in 1991.

In a Thai-style political compromise, Prem was named to the Privy Council in 1988. He became its president a decade later, cementing a long-established bond with the monarchy. His strong connections to the Palace and military helped ensure he remained an influential figure in politics until the end of his life.

Prem was taken to hospital yesterday morning after failing to rise at his usual time of 5am, according to a source close to him. Doctors at Phramongkutklao Hospital spent three hours trying to resuscitate him, but he died at around 8am. General Prem’s royally sponsored bathing rite is scheduled for today at Wat Benchamabophit in Bangkok, his family announced.