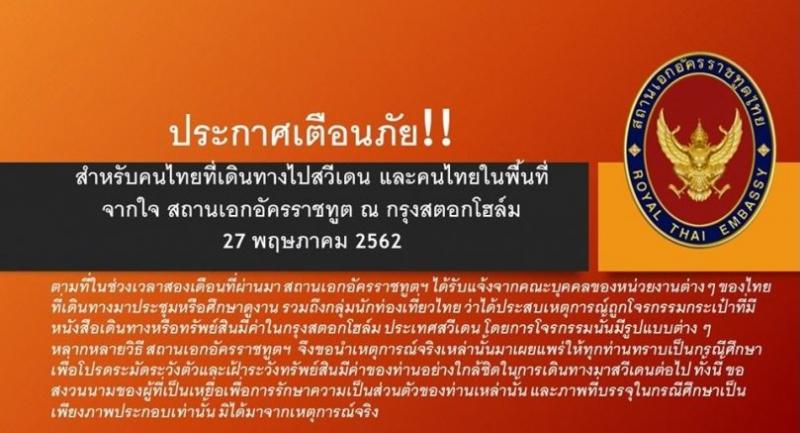 The Thai Embassy in Sweden has warned Thais visiting the country about the risk of being robbed while on their travels, following repeated reports of such crime in recent months.

In its statement, the embassy revealed that in the past two months, it had been alerted by many Thais visiting Sweden on study, pleasure or business trips that their belongings and valuables, including passports, had been stolen.

The most common locations were hotel lobbies and breakfast rooms, therefore all visitors should be careful about keeping their belongings secure, even at their own hotels, the statement said.

Moreover, visitors should be extra-cautious while in crowded areas such as train stations, airports and walking streets.

Many thieves give the impression that they are lost and ask for directions in order to catch a target off guard, while others ask the victim to take a photo for them and then grab the opportunity to steal from them, the statement explained.

Thais should therefore not leave their bags, passports or valuables far from them at any time, it warned.

The statement also said that no one should assume that their friend would take care of their belongings.

Visitors should not carry large sums of cash, and should divide and keep their money in separate places so that in the event of theft, they would have some money left, the embassy recommended.

Moreover, the embassy said shops in Sweden did not prefer cash, while some refused to accept it, therefore Thais should be ready to use a credit card or some other way of paying, such as mobile payment.

Visitors are also recommended to make paper or digital copies of their documents, such as passports and visas, in case of emergency.

Thais affected by such crime in Sweden can call the embassy at +46702344191 or +46702344192, e-mail to [email protected], or message via Facebook atwww.facebook.com/RoyalThaiEmbassyStockholm.