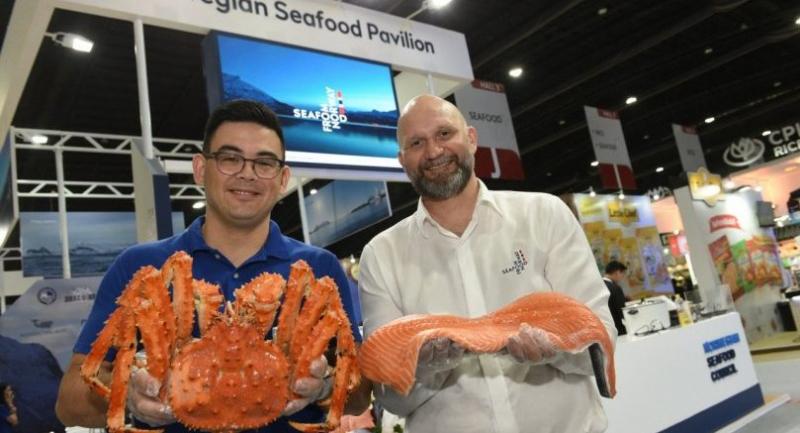 With export of fresh Norwegian salmon to Thailand exceeding 10,000 tonnes for the first time in 2018 and Norwegian seafood totaling 29,000 tonnes valued at Bt4.8 billion, an increase of 10 per cent from last year, Thailand has become the focal point of the Norwegian seafood industry’s market investments in Southeast Asia.

Among the 11 trade shows exhibiting at THAIFEX World of Food Asia 2019, Norwegian Seafood Council (NSC) and Norwegian seafood exporters are showcasing their premium quality seafood from May 28 to June 1 at IMPACT Exhibition and Convention Centre in Bangkok.

A new director for Southeast Asia, Asbjozrn Warvik Rortveit, is representing the NSC.

“I feel both honoured and excited to represent Norway’s most important industry here,” said Rortveit. “Thailand is an attractive market with a strong domestic consumption of Norwegian seafood, especially salmon. Thai consumers are sophisticated; they are trendy and quality-conscious. Thus, our mission in Thailand will be to build a strong identity for Norwegian seafood with clear associations and to be the most preferred country of origin for salmon and fjord trout, particularly raw consumption. Our focus will be to educate both B2B and B2C on how to properly handle Norwegian seafood through various marketing activities.”

The council is relocating its regional office from Singapore to Bangkok. The significant move reflects NSC’s confidence in the Thai market’s potential. In the past three years, exports of fresh Norwegian salmon to Thailand have increased by 25 per cent yearly, accounting for 50 per cent of the total Norwegian seafood export to Thailand and the highest volume to a single market in Southeast Asia.

“The number is noteworthy as it shows a continuous growth that stems from the Japanese restaurant boom and the liking for sushi and sashimi among Thai consumers,” Rortveit added.

Norwegian seafood places its trademark in sustainability, food safety and origin, which together account for its reputation as the world’s largest salmon exporter with production of 1.3 million tonnes. As well, 2.6 million tonnes of seafood is exported yearly worldwide.

A strict management system and advanced technology are in place to ensure food safety, production quality and welfare of the fish. Farm to table delivery of Norwegian seafood can take as little as 48 hours to reach Thailand’s Suvarnabhumi Airport.