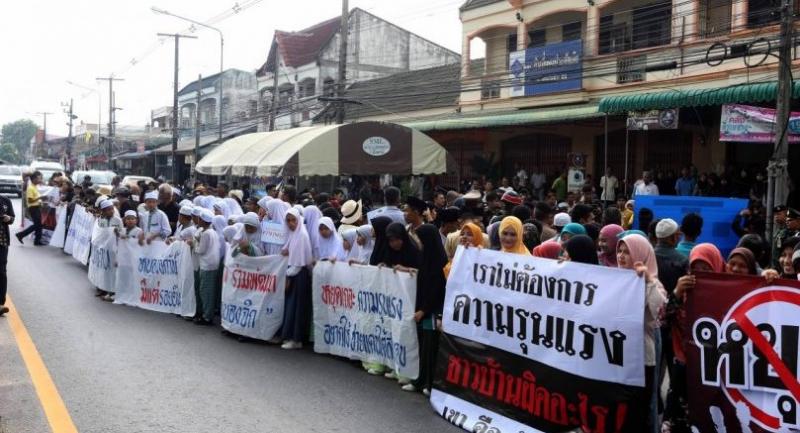 Buddhists and Muslims join together in a large rally against violence in Pattani’s Nong Chik district yesterday after a bomb blast rocked Bo Thong Market. Photo By Charoon Thongnual

AUTHORITIES have interrogated 18 people living near the site of this week’s clash between security officials and suspected insurgents in Yala’s Yaha district, according to an intelligence source.

“They were brought in for questioning under martial law as authorities intend to go after the unidentified gunmen in Monday’s clash,” the source said yesterday.

The gunfight lasted several hours in Moo 4, Tambon Kathong, on Monday morning during authorities’ efforts to step up security measures in the area. The violent confrontation killed a suspected insurgent and injured two officials.

Abdullah Lateh, who was wanted for several security crimes, died at the scene.

Yala is a province in the deep South where unrest has raged on for more than a decade, claiming thousands of lives.

In the nearby province of Pattani, police are investigating a bomb blast that rocked the Bo Thong Market in Nong Chik district, also on Monday.

The explosion killed two people, including a 14-year-old boy, and injured 23 others. Of those injured, eight remained hospitalised.

The ongoing investigation suggested the rangers were the targets of the attack, as it was very likely that bombers knew that rangers would be providing security at the market. Explosives hidden inside a parked motorcycle went off just 10 minutes after the rangers arrived.

The blast injured four rangers, all of whom are now being treated in hospital. One of the rangers, 34-year-old Abdulloh Kahong, is reportedly in a critical condition.

“The motorcycle used for this blast was also used for a shooting at a restaurant last month,” said Pattani’s police chief, Pol Maj-General Piyawat Chalermsri.

He said that based on available evidence, there were reasons to believe that Monday’s explosion was staged by a group led by Maolana Samoh.

“Abdullah, the man who was killed in Yala’s Yaha district, is a close friend of Maolana,” Piyawat said.

Piyawat said most witnesses remembered seeing the motorcycle parked at the market but none could remember who parked it there.

“So, we are going to closely examine recordings from security cameras near the scene. We believe we should be able to see who drove the motorcycle to the spot,” the police chief added.