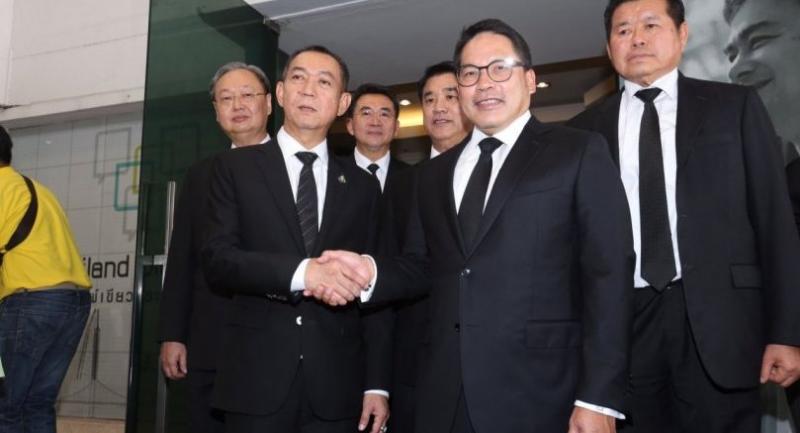 Moves to form a coalition government led by the pro-junta bloc has hit a snag due to discord over certain ministerial portfolios allocated among allies, a Democrat Party source said.

“All deals or ministerial posts that Phalang Pracharat offered to its allies are cancelled, and it’s all back to square one,” the source said on Wednesday.

Reports say that the Sam Mitr or Three Allies faction in the pro-junta party want the Agriculture portfolio, which has already been offered to the Democrat Party. The Sam Mitr faction comprises Somsak Thepsutin, Suriya Jungrungreangkij and Somkid Jatusripitak.

A Phalang Pracharat source said the party’s top execs had called on the Democrats to swap the Agriculture portfolio with that of the Education Ministry when they sent an official invitation to the party and met the Democrats on Monday, but Democrat Party turned down the offer.

With this unfinished deal, the Democrat Party delayed its meeting on Tuesday to decide whether to join the pro-junta bloc to form the next government, amid reports that they will not return the Agriculture portfolio.

The Democrat Party, with only 53 MPs, has already secured the highest position in the legislative branch after its senior leader Chuan Leekpai was elected speaker of the lower house on Saturday.

Meanwhile, Charthaipattana, which had earlier announced it would support Phalang Pracharat to form the next government, said it has yet to make a decision. The party changed its stance because they have yet to be offered the Natural Resources and Environment Ministry, which they have been eyeing from the start, a party source said.

Reports say that Phalang Pracharat may give this post to its own MP Santi Prompat, who held the post previously, and allocate the Social Development and Human Security Ministry to Chartthaipattana.

With 116 seats in Parliament, Phalang Pracharat, which nominated junta chief General Prayut Chan-o-cha as its sole PM candidate, cannot form the next government without support from Democrat Party with its 53 seats and Bhumjaithai with its 51 seats.

The two parties had earlier joined up to create a third camp with 104 seats in order to boost their bargaining power with both the pro-junta camp led by Phalang Pracharat and anti-junta bloc led by Pheu Thai and Future Forward.

The anti-junta camp claims it has garnered 246 seats from seven parties, while the pro-junta camp may have 254 seats if all deals are done and dusted.