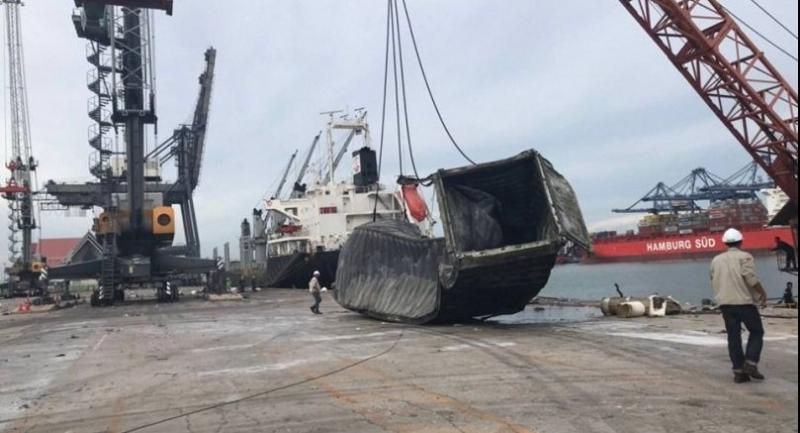 Some of the burnt chemical cargo is retrieved from the seabed at Leam Chabang Seaport yesterday. Photo credit Pollution Control Department

AN IMPORTER has been hit with a Bt50,000 fine for illegally importing undeclared chemicals into the Kingdom.

Laem Chabang Seaport director Vice Admiral Yutthana Mokkhao said yesterday that KMTC Co Ltd had been fined for intentionally failing to declare its shipment of toxic chemicals on board the KMTC Hongkong container ship. The port authority has also filed a complaint against KMTC, Yutthana said, adding that officers are continuing to investigate why the company had failed to declare its shipment, and that may result in more charges.

He also said that there are concerns that many of the cargo ships anchored at the seaport might be containing toxic chemicals, adding that the authority to check the cargo lay in the hands of the Customs Department.

Environmental experts are slamming the authorities for not taking strong measures to prevent the leak of dangerous chemicals. Somnuck Jongmeewasin, a leading environmental expert with EEC Watch, said the official actions taken to investigate and punish the importer of undeclared chemicals was “insufficient”. The authorities should also determine exactly what chemicals made up the now-burnt cargo, as there are reasons to believe that many unnamed chemicals may have been part of the fire, he added.

“There is already an official report from Leam Chabang Hospital that tests of the saline solution used to wash chemical off patients exposed to the chemical fallout from the Saturday’s fire, showed the presence of a strongly alkaline chemical,” Somnuck said.

“This goes against what the officials had disclosed earlier – that the chemicals were acidic. So, there must be more chemicals in this cargo, and the authorities should conduct a full investigation.”

Moreover, he quoted unnamed industrial sources as saying that the port authority had transported more than 6 billion tonnes of contaminated water to be treated elsewhere, which he said was a significantly large volume of waste water.

“We want to know why there is such a large quantity of contaminated water and where it will end up. These are the questions that the port authority needs to answer,” Somnuck said.

He also revealed that local fishermen had found suspiciously burnt empty barrels floating in the sea after the fire. Somnuck said these should also be investigated.

Meanwhile, Leam Chabang municipality chief Jinda Thanomrod said 1,092 people had so far shown up to file complaints after the fire. Most had sustained injuries from the chemical fallout and many also complained of their property being damaged.

Jinda said all the affected will soon be compensated, as Laem Chabang Seaport had already set up a committee to deal with the issue. The South Korean owner of the ship yesterday reported to Laem Chabang Seaport Office, along with representatives from its insurance company, and promised to compensate all affected persons unconditionally.