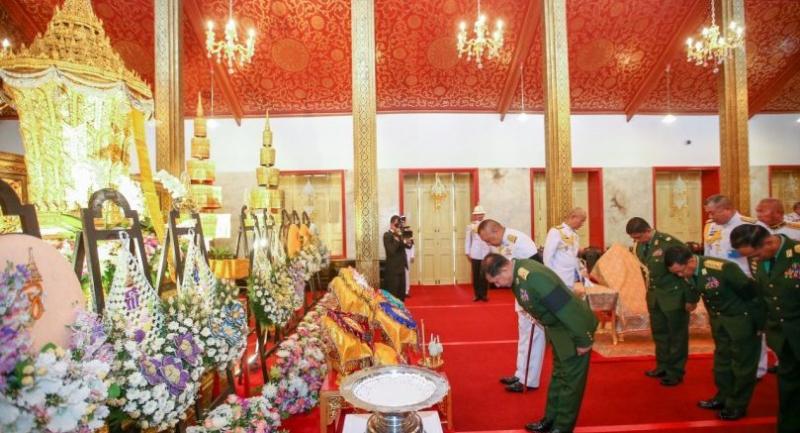 The Myanmar general signed a condolence book at the privy councillor’s residence before proceeding to bid farewell to the former prime minister at the temple.

Min Aung Hlaing told reporters that he regarded Prem as his “godfather”, and said he felt that losing Prem was like losing a father.

“General Prem was a year younger than my father who already passed away in 2002. I met him for the first time in 2012 after taking the position of Armed Forces commander in chief,” he said.

The Myanmar general said that every time he came to Thailand he would make a courtesy call on Prem, who always welcomed him at his residence.

Min Aung Hlaing praised Prem's vast experience in the military and politics. “General Prem always told me about his good experiences and gave me good advice every time we met,” he said.

He said Prem told him that each country has its own democratic ways and that we should be grateful and pay back to the motherland. “Those who are ungrateful to their own country are betraying the country,” he said.

Following the footsteps of the late King Rama IX, Prem had told the Myanmar general that agricultural countries like Thailand and Myanmar should solve poverty by using agriculture.

Moreover, a leader should act as an example for his juniors and treat others with respect and fairness.

“I always follow his advice which helps me walk with confidence,” he said.