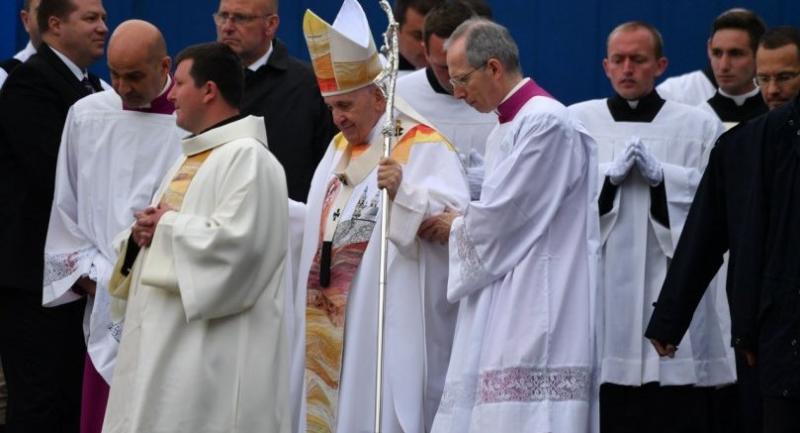 Pope Francis arrives to lead an outdoor mass at the Marian Shrine of Sumuleu Ciuc on June 1, 2019 in Miercurea Ciuc city. /AFP

Tens of thousands gathered Saturday for a mass by Pope Francis on his second day in Romania with the ceremony in a predominantly ethnic-Hungarian part of the Transylvania region set to be the highlight of his trip.

The mass has been keenly awaited for reasons of both faith and national identity in majority Orthodox Romania where believers suffered under the post-war decades of Communist rule.

For Catholics in the "Szeklerland" area, where some 600,000 ethnic-Hungarians comprise a majority of the population, the pope's visit -- a first for that region -- is seen as welcome recognition of their identity.

In pouring rain, a sea of colourful umbrellas and rain coats formed around the hillside Sumuleu Ciuc shrine early Saturday.

In all, an estimated 200,000 people were expected to attend the ceremony, which will see the Argentinian pontiff present a golden rose at the large wooden replica of the Madonna -- a tradition for popes visiting major Marian shrines.

Most pilgrims will be Romania-based ethnic-Hungarians, but organisers expect some 25,000 will also travel from Hungary itself, as well as from Slovakia, Serbia and Ukraine, all countries with sizeable Hungarian communities.

Having come by train, car and bicycle, thousands of people already started to gather late Friday with churches in the nearby small town of Miercurea Ciuc, 215 kilometres (133 miles) north of Bucharest, staying open all night to accomodate pilgrims.

Between religious chants in Hungarian, they expressed their hopes for the 82-year-old's visit.

"If I meet the pope, I will tell him that Transylvania must be autonomous," Zoltan, 60, who came from western Hungary and makes an annual pilgrimage to Sumuleu Ciuc every year since 2006, told AFP.

Hungary's nationalist premier Viktor Orban, who is not going to Saturday's mass, has been building ties with the diaspora since he returned to power in 2010 as part of a so-called "national policy" that is seen warily in Romania as an effort to extend Budapest's reach.

Over the weekend, the pope will continue to travel across the country to meet people of diverse faiths and languages, which include 18 officially recognised minorities.

Later Saturday, he will travel to Iasi in northeastern Romania, where he will meet with youngsters.

Francis arrived in the capital Friday to begin his three-day trip, praising the "sacrifices" of Romanian emigrants -- millions have moved abroad in search of better work opportunities -- and urging the faithful to reject "a culture of hate" following nationalist gains in recent European parliament elections.

In Bucharest, thousands lined the streets to wave to Francis in his pope mobile and filled two cathedrals. Many television channels transmitted his visit live.

He also had a private meeting with Orthodox Patriarch Daniel despite their strained relations, and they prayed alongside each other -- one in Latin and the other in Romanian.

The pope's visit follows 20 years after John Paul II received a warm welcome for his perceived role in the fall of Communism.