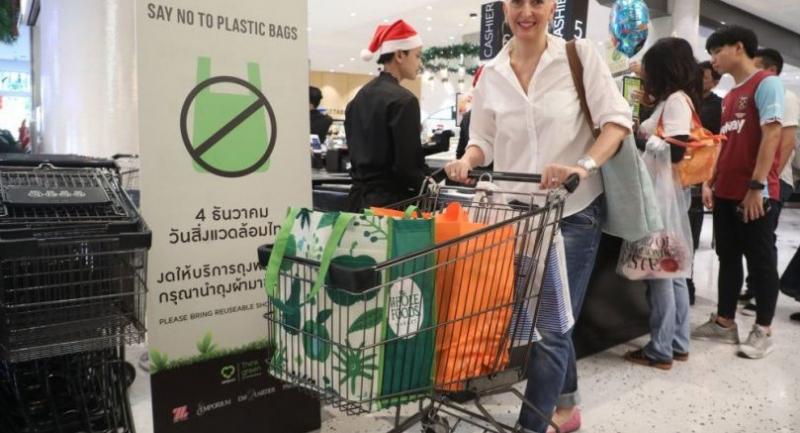 File Photo : Thai Environment Day gives consumers a chance to show they care by waving off offers of plastic bags at a department store.

WITH WORLD Environment Day being observed on Wednesday, major retail chains Tesco Lotus and Central Group have pledged to further reduce plastic use in their operations, and on a permanent basis.

The announcements drew praise from some environmentalists, but Greenpeace said the level of commitment remained inadequate to have the needed effect on Thailand’s plastic-waste nightmare.

A fundamental shift in consumer behaviour was needed, it said.

Tesco Lotus corporate affairs director Salinla Seehapan said the chain would eliminate all “expanded polyethylene” packaging by the end of this month and switch to recyclable materials instead.

Tesco Lotus will also continue efforts to reduce the use of plastic bags, she said.

“We have been gradually reducing expanded-polyethylene packaging in all 2,000 outlets since last year and we are proud to announce that, by July, none of our stores will use it,” Salinla said.

“From now on, our food products will be packed in recyclable thermoforming plastic plate, which could reduce the use of expanded polyethylene by more than 400 tonnes a year.”

Cheap and lightweight, expanded polyethylene foam packaging remains in wide use for wrapping food, electronic and electrical goods, furniture and more, but it is considered non-biodegradable. Scientists say it will take thousands of years to fully break down.

Its lightness actually contributes to the waste problem, since the wind carries off discarded pieces, littering streets and often ending up in the sea.

There it can break up into micro-plastic easily swallowed by marine life, thus contaminating the food chain and posing a health hazard to consumers of seafood.

Salinla said Tesco Lotus would maintain its policy of banning plastic bags on the fourth day of every month in a bid to encourage customers to bring fabric bags or their own plastic bags to reuse.

The chain will also open a sixth plastic-bags-free outlet on Koh Chang in Trat by the end of the year where the bags are banned year-round.

Beginning on World Environment Day, Galante said, all of the chain’s outlets except its food markets would stop automatically placing purchases in plastic bags. Customers will have to specifically request a plastic bag or bring their own.

Greenpeace country director Tara Buakamsri said he was pleased to hear the two retail giants were taking stronger measures to reduce plastic waste, but warned that it’s still not enough to meet the national goal of abandoning expanded polyethylene food packaging completely by 2022.

Every retailer and every consumer must adopt more intensive measures to cut down on the use of all kinds of single-use plastic, Tara said.

“So we should focus on lessening their reliance on single-use plastic by fostering different behaviour and a fresh mindset.”

The Plastic Institute of Thailand estimates that, in 2015, more than 2.048 million tonnes of plastic were used in product packaging and more than 476,000 tonnes were used to make plastic bags.

Rutchada Suriyakul Na Ayutya, director-general of the government’s Environment Quality Promotion Department, said every Thai was generating 1.15 kilograms of waste a day on average through reliance on single-use plastic.

The result is more than 2 million tonnes of plastic waste annually.

And only 500,000 tonnes of the waste was being properly managed and recycled each year, Rutchada said.