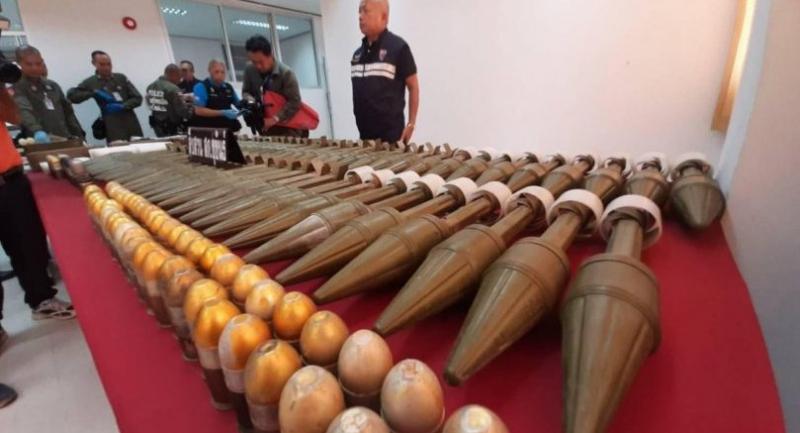 A cache of weapons found hidden in Si Sa Ket’s Kukhan district had been used dozens of times during the 2010-2014 political demonstrations, a senior forensic police officer said on Friday.

Pol Maj General Thawatchai Mekprasertsuk, deputy forensic police office chief, said that the identification numbers on the weapons revealed that they had been used more than 50 times during the unrest

He was speaking after accompanying deputy national police chief Pol General Srivara Rangsibhramanakul to the site where the weapons were found. The weapons retrieved from a waterway included M-79 and AK-47 rifles, 21 RPG grenades and 70 grenades for 40-mm grenade launchers.

Srivara said most of the weapons were not manufactured in Thailand and were believed to be from Russia or former Russian states. “The weapons are old but still intact. Some were used in Thailand a long time ago,” he said.

Tawatchai said the rifles and RPG grenade launchers were used during the demonstrations in Bangkok areas such as Uthong Road, Government House and the Dusit Thani hotel.

The waterways where the weapons were hidden were about 40 kilometres from Thailand's border with Cambodia.

However, in a separate interview, the Second Region Army’s spokesman Maj General Akkaradej Boontiem, said that it was still to be determined whether the weapons were used in the political demonstrations back then.

The area where the weapons were found used to be an area of conflict for internal warring factions from Cambodia.