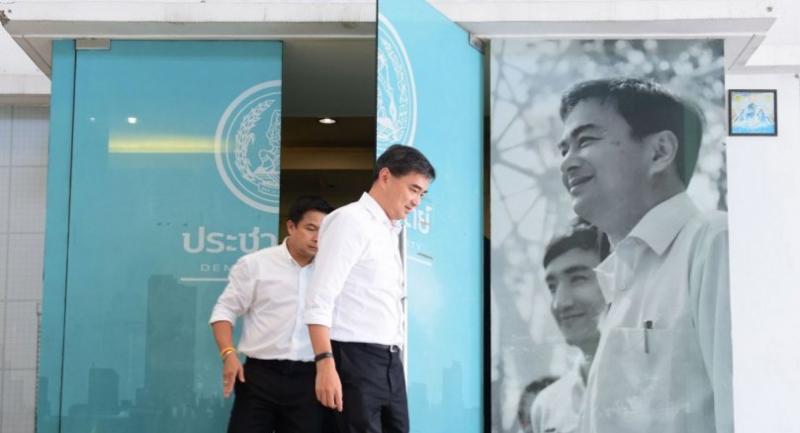 THE FUTURE of the country’s oldest political party, the Democrat, is gloomy, say analysts, and it’s sure to be an uphill task if it is to regain popularity after it joined the pro-junta coalition government.

The 73-year-old party suffered a humiliating setback in the March 24 election, winning only 53 seats, and not a single seat in Bangkok, a key stronghold. Ahead of the March election, Democrat leader Abhisit Vejjajiva had declared that his party would not support Prayut’s return to power and would not ally with any “corrupt politicians”. In the wake of the trouncing at the polls, he resigned as party leader and then quit as a party-list MP when the Democrats swung to Prayut’s side.

“There is no bright future for the Democrats – the party is dying,” said Titipol Phakdeewanich, dean of political science at Ubon Ratchathani University.

Its decision to join the pro-junta bloc proves that they never believed in the principles of democracy and party interest was a priority for them, he said.

Titipol said the Democrats going into the election failed to consider the more liberal outlook of the burgeoning young generation of voters.

Political observers doubt that the party can make a comeback anytime soon, a view shared by Stithorn Thananithichot, a political scientist at King Prajadhipok’s Institute.

Much depends on how well Phalang Pracharat – with which the Democrats share a support base – fares in government, Stithorn said. “The road to a comeback is gloomy. It would be a tough task for them to win more seats in the next election,” he said. At best they might cling to the current 53 MPs. Dropping significantly below that figure, to say 20 seats, it would be time for a major strategy review, Yuthaporn said.

First, if they do become a partner in the coalition government, they have to push through their own policies and do a better job of it than Phalang Pracharat. That would |foster support in the South.

And second, they should lead the drive to amend the current Constitution so that it no longer favours the military junta so overtly.

The Democrats could also take advantage of the fact that former leader Chuan Leekpai has been chosen as president of Parliament and can thus play a significant role in facilitating the amendment process, Stithorn said.

Most importantly, he added, the Democrats have to be “sincere” about the amendment, conducting the process fairly and transparently, with ample room for citizen input.

Even though the amendment would ultimately fail, lacking the support of the junta-appointed Senate, the Democrats would stand to garner public favour, having led the attempt, Stithorn said. “They need to prove that the public can rely on them.”

But Titipol was dubious that Democrats can regain support by being a government coalition partner in the hope of having a chance to make good on campaign pledges.

“This is especially likely if the Prayut government-to-be stands for a full term, because Phalang Pracharat would eventually take all the credit. They would not allow anyone to overshadow them,” he said.

A better strategy would be to withdraw from the coalition, a bold move that might be regarded as noble and enable the Democrats to survive for the long term.

The younger generation of politicians have always represented hope that Thai politics can change, but this might not work in long-established parties like the Democrats. A major concern now is how the party can move on after some members of its “New Dem” faction quit the party in disappointment over the decision to back Prayut as PM.

“I wonder who will inherit the party, because one day all the middle-aged and veteran politicians remaining will wilt away,” said Yuthaporn.

The academics agreed that its timeworn structure and conservative ideology make it too difficult to implement serious change, so they suggested that the younger members who have now left form an entirely new party.

“History has proved that new generation is unable to change the party,” Stithorn said.

“It would be easier to have the New Dem found a new party rather than fighting for change in the old one.”

Yuthaporn suggested that Abhisit join the younger faction as chief adviser to the new party.

“Politics these days is in disruption,” he said. “If old political parties won’t adapt or adjust, it’s likely they’ll face the same fate as the Democrats.”