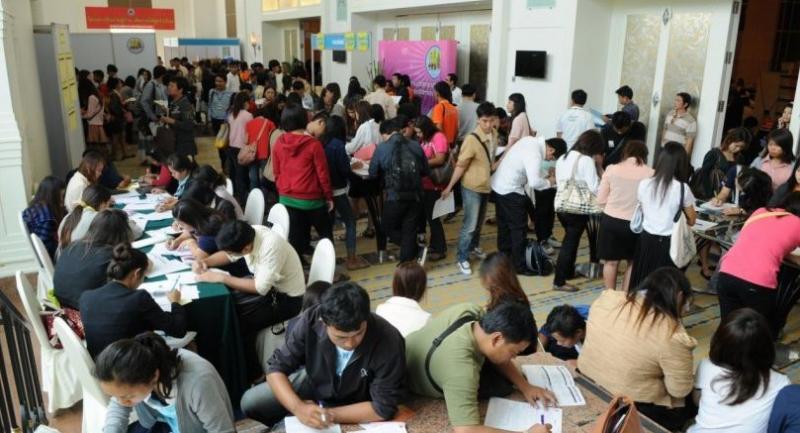 South Korea remains one of the most attractive countries among Thai job-hunters, with tens of thousands applying to join the Employment Permit System for Foreign Workers (EPS) in South Korea at events held by the Department of Employment (DOE) over the weekend in Bangkok, Lampang, Nakhon Ratchasima and Udon Thani.

DOE director-general Petcharat Sinuay said a total of 10,000 people from Udon Thani and nearby provinces had crowded into the Tuk Com Landmark Shopping Plaza in Muang district to apply for tests on Korean language proficiency and working skills in the hope of securing jobs in the manufacturing industry, as well as in agriculture, livestock development and construction via the EPS system. She also emphasised that people must not believe those claiming to be able to find them jobs in South Korea because nowadays all applicants needed to go through the proper exams and processes.

Ban Dung district resident Wanwipa Rodae said she had always wished to work in South Korea but didn’t have the money to go and try her luck. “People used to invite me to go work in South Korean illegally, but I didn’t dare go and certainly didn’t want to live in hiding,” she said, adding that she was pleased that the DOE was granting an opportunity for her and others to apply for jobs to work legally there.

“This is my first time I have applied to work overseas and I am keeping my fingers crossed because, if I succeed, I will be able to send money home to support my family,” she said, vowing to practice Korean language to prepare for the exam in July.

As jobs in South Korea pay high wages of between Bt45,000 and Bt60,000 a month, tens of thousands of Thais go to work there without permission. The current number of Thais in the country is estimated at well over 100,000 but only 30,000 have travelled via the EPS system.

South Korean authorities have been trying to discourage people working illegally, which is why there have been several news reports of Thais being denied entry and deported. Thai authorities have also implemented measures to solve the problem while constantly warning of the plight faced by illegal workers due to the lack of legal protection. The media has also reported cases of illegal Thai falling ill in South Korea and having to cover their own medical treatment, which is usually expensive. The South Korean authorities have become tougher on foreigners who overstay and work illegally now that that grace period for them to voluntarily leave the country and avoid punishment has ended.