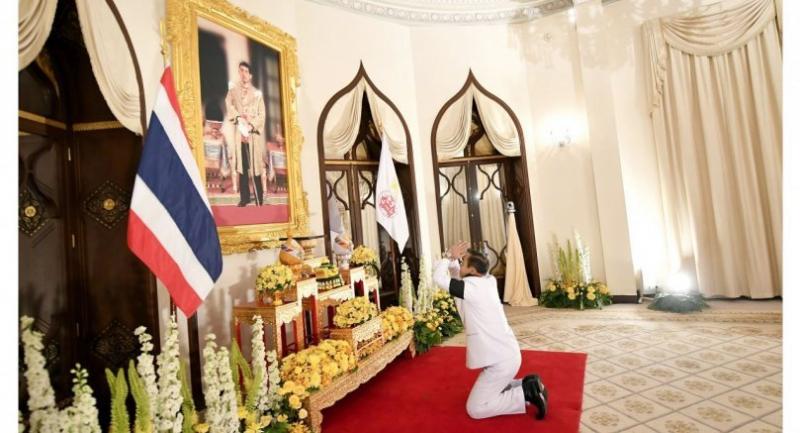 GENERAL PRAYUT Chan-o-cha yesterday received royal endorsement as the new prime minister in a ceremony at Government House six days after winning a vote in Parliament, but there are no final deals yet on the allocation of Cabinet portfolios.

The ceremony was attended by the leaders of the pro-junta coalition, led by Phalang Pracharat leader Uttama Savanayana who congratulated Prayut after the royal endorsement reception yesterday. Among senior leaders present at the ceremony yesterday were Bhumjaithai Party leader Anutin Charnvirakul and Chartthaipattana core leader Varawut Silpa-archa. However, Democrat leader Jurin Laksanawisit, whose party members have expressed their discomfort at joining the pro-military allies, was conspicuous by his absence.

The Democrat Party, which saw a split over the decision to join the Phalang Pracharat-led coalition, was represented by secretary-general Chalermchai Sri-on.

After receiving the endorsement, Prayut expressed his gratitude to His Majesty the King and promised to maintain high ethical standards and work to serve the public following the intention of the monarch. Prayut also thanked Parliament, whose 250 senators he had handpicked to secure his position, and the public for their support.

Meanwhile, the general said yesterday that the issue of portfolios had not been discussed yet but he reiterated that he would have the final say on the composition of his Cabinet. It was only his first day as prime minister of the new regime, he added.

Earlier yesterday, at a weekly press briefing, Prayut said the discussions on ministerial positions must take into account the appropriateness of the candidates as well as public interest.

“Now we are the elected government, with elected MPs from different parties. We are the government of all Thai people. The policies to be implemented must match the budget in the best interest of the public,” Prayut said. “It will be decided soon.”

Responding to concerns about the impact of Article 44 on different issues, Prayut told the public not to be worried, saying everything would be sorted out before the new government takes office.

Until the new government was sworn in, the acting government would have full authority to carry out the work, Prayut said.

Some see the new government as struggling in Parliament because of strong opposition while others believe it would manage to survive.

Political scientist Sirote Klampaiboon told The Nation yesterday that parliamentary politics may not be able to do much damage to the inexperienced general. The expert said Prayut could just ignore Parliament altogether.

“Prayut won’t even have to handle Parliament,” Sirote said, referring to the notion that the general would be beaten in the Lower House. “What I think we will see is parliamentary dictatorship with backing also from the Army.” Not only does Prayut have the majority of MPs under his control in the chamber but he also has good connections with the Army leader, the expert explained.

The opposition, which many people believed could grill Prayut in the house, may not be able to do much, Sirote said.

For one thing, the censure motion could only come once a year, he added. On top of that, the Army’s interference and pressure would make it difficult for the opposition to scrutinise Prayut’s administration, Sirote explained.

The major challenge facing Prayut is in building trust with the public, he said.

“Prayut has to create a government that looks inclusive in the eyes of the public,” he said. “Right now, we only have people from the [anti-Shinawatra] side in it, such as Nattapol Teepsuwan and Puttipong Punnakanta. Also, the government has to prove itself better than its predecessor. Solve the bread and butter issue.”

Attasit said the new government would have no honeymoon period. People expect to see economic issues being resolved in the next three to six months, he added.

How long the government would last would depend largely on its performance and what the public thought of it, the expert said.

Attasit, too, thinks Prayut can easily dodge encounters with the opposition. A motion of no confidence can only be brought once a year, he noted.

Other than that, the National Legislative Assembly had already passed more than 500 pieces of legislation under the junta rule, which should be sufficient for this administration, the political scientist said.

The only thing Prayut may have to worry about is the national budget bill, he added. But still, he said, Prayut already had a majority of MPs on his side and the margin could widen if the Election Commission decides to disqualify more opposition MPs or have election reruns, he said.