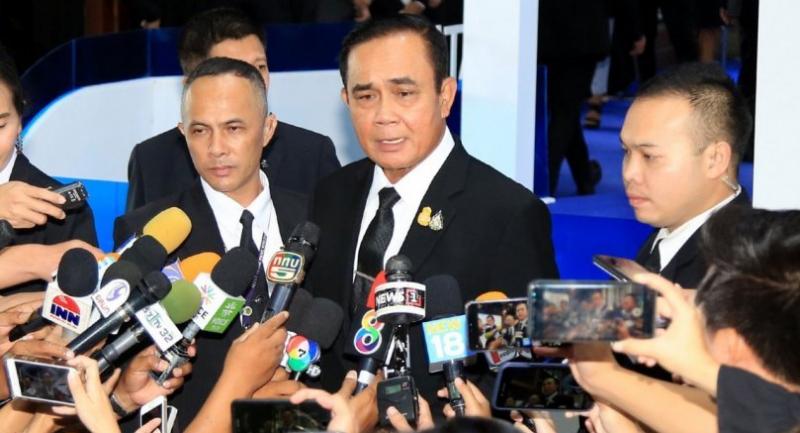 Move seen as Premier’s attempt to soften public perception of his links to the military.

COUP LEADER-turned-two-term prime minister General Prayut Chan-o-cha has decided to take over the leadership of the junta-aligned Phalang Pracharat Party once his Cabinet is installed, a party source said.

A party assembly to change the executive board is expected next month, the source said.

Uttama Savanayana would reportedly step down to make way for Prayut, while Sontirat Sontijirawong would likely continue as secretary-general.

The No 1 party-list MP, Nattapol Teepsuwan, might also emerge as contender for the secretary-general’s job but was deemed by the source as unlikely to take over the post.

The move to prop Prayut as the party leader is aimed at reportedly transform the military general into a full-fledged politician and reduce public perception of his links with the junta. That association has been among the most vulnerable spots for attacks by political rivals.

Prayut plans to stay in politics for the long term, the source said. Without holding a party membership, it was difficult for the general to help the party campaign and build up popularity.

Prayut’s leadership of Phalang Pracharat was also aimed at resolving tensions in the party related to the influential Sam Mitr or Three Allies faction. The group had been a stumbling block in the recent allocation of Cabinet portfolios.

Deputy Prime Minister Wissanu Krea-ngam, in charge of the government’s legal affairs, said yesterday that Prayut could take the position if he wanted to.

Wissanu, however, also warned that if anything went wrong, Prayut would inevitably be affected as a party executive. Thus, the general should also plan a way out in case of an emergency, the deputy advised.

Phalang Pracharat’s deputy spokesman, Thanakorn Wangboonkongchana, told The Nation that he would prefer not to speak about the issue yet. He had not been notified of any changes in the party so far, he said.

Prayut had yet to register as a party member, Thanakorn noted.

Another source in the party said the circulating leaks were inconsistent with the truth. It had been leaked by party members who were disappointed with the allocation of ministerial positions, he added.

The leaked reports aimed to discredit the party, the source said.

The party had yet to discuss replacing Uttama with Prayut, he said, adding that Uttama and Sontirat had been dedicated executives and were well-accepted by their colleagues.

Meanwhile, political scientist Wanwichit Boonprong noted that Prayut had up until now kept some distance between the party and himself.

He viewed any move to assume the party leadership as intended to eliminate the middle men in talks between the party executives and partner parties.

“With Prayut’s leadership, it would become clear who is in charge of the party,” the expert explained. “Prior to this, many people did not give Uttama and Sontirat much credit. They did not think [these two] could make the decisions. If Prayut takes charge, it would become more clear.”

Some pundits believe Prayut was having to shift fully to the political sphere due to alleged lack of support from the Army, but Wanwichit disagrees, adding the question was irrelevant.

Prayut is also said to be considering taking control of the defence ministry. Wanwichit said to do so would be a way to maintain the network backed by his close colleague and former mentor, General Prawit Wongsuwan, who might step down because of health issues.

But this would not necessarily mean that Prayut’s relations with the Army would weaken, he added.