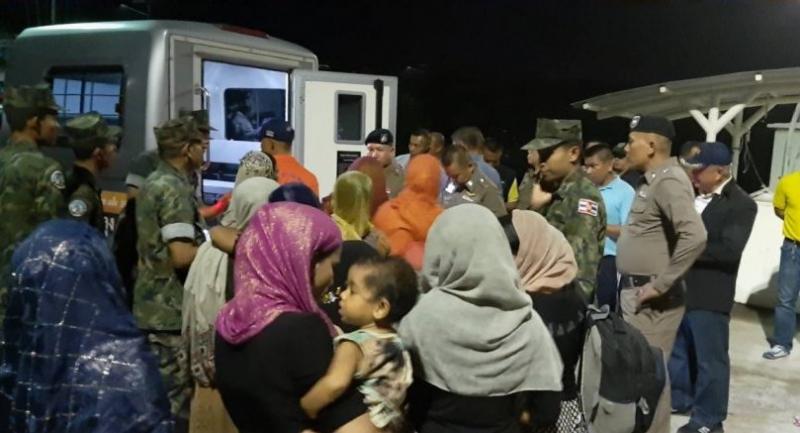 MALAYSIA STEPPED up security measures along its border with Thailand after a group of 65 Rohingya landed in southern Satun province this week on their way to the predominantly Muslim neighbouring country.

Malaysian maritime police, custom officials and border guards were seen patrolling along the border yesterday. Malaysia has been the prime destination for Rohingya people, and as of April, 24,720 refugees have been given shelter in the country, the United Nations High Commissioner for Refugees (UNHCR) said.

Deputy Government spokesman Lt-General Weerachon Sukondhapatipak said Prayut wants an investigation into who was behind the landing of the vessel at Koh Rawi in Tambon Koh Sarai of Satun’s Muang district.

The premier has also called on public health agencies to provide the immigrants with health check-ups as per humanitarian principles and also to prevent the spread of any contagious diseases they may be carrying, he added.

Thai boat captain Sangkhom Paphan, 49, and five Myanmar nationals have so far been charged with bringing illegal immigrants into the country. Police are also checking to see if they are part of a human-trafficking ring.

Suchat said the 65 Rohingya people were being screened by the Social Development and Human Security Ministry to see if they are human-trafficking victims. Officials are looking for an interpreter to help interview the refugees, he said.

A high-ranked official source said that the system of trafficking Rohingya has changed. Now, the refugees currently in Malaysia contact a trafficking ring in Myanmar directly to bring their relatives to a third country by boat, car or train. The traffickers then hire Thais to transport the refugees through Thailand to their destination, the source said.

The source added that this change took place after Lt-General Manas Kongpan was arrested in 2015 along with Pajjuban Angchotephan, the |former president of the Satun Provincial Administrative Organisation, and Padang |Besar Municipality’s former mayor, Banjong Pongphon.

Manas and Pajjuban were jailed for 20 years each and Banjong for 10 years in May. Manas was linked to the 2015 discovery of a mass grave in a jungle in the southern border province, where traffickers had hidden their victims’ remains. Most of the victims were ethnic Rohingya from Myanmar and Bangladesh.

Dhaka and Nay Pyi Taw have signed a pact to repatriate, but the plan has been on hold since November as the refugees have resisted due to fear for their safety.

Asean leaders are expected to discuss the Rakhine crisis during a summit in Bangkok later this month in order to seek a solution to help facilitate the repatriation.