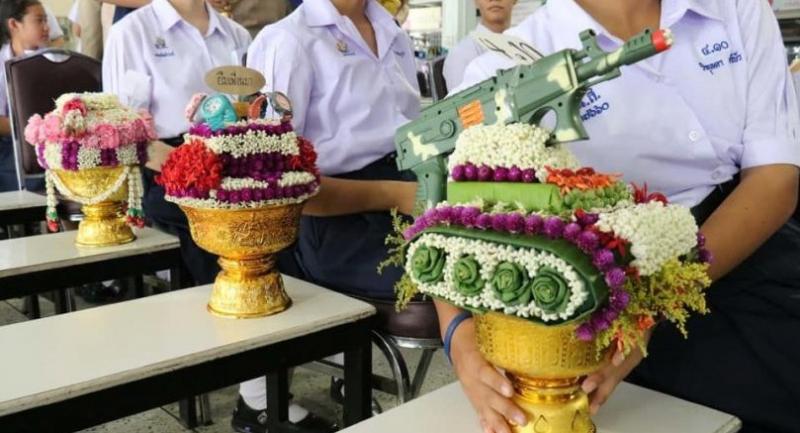 High school students of Chumpol Phisai school in Northeastern Nong Khai province attached sarcastic messages on a pedestal tray design. They wrote “250 Votes” on a the heavier side of a balance scale image and “Millions of Votes” on the lighter side of the scale. The message apparently referred to Thailand's recent election for Prime Minister, where 250 senators from the junta National Council for Peace and Order had the power to elect General Prayut Chan-o-cha to the top government post over more than a million votes from eligible voters.

After photos of the pedestal tray spread on social media, Police Colonel Phuwit Siripanit, the superintendent of district Phon Phisai in Nong Khai police station instructed officials to investigate the school and order the students to delete every picture shared on the social media.

Later Phuwit said that he instructed police to inspect the school so he would be prepared if high-ranking officials asked him about the matter.

“Personally, I think it’s just the attitude of teens towards politics. I see no spiteful things from the students. Also, my subordinates just visited the school, took photos, then sent them to me. I didn't order them to force the students to delete pictures from social media,” he said.

Many people shared opinions on the incident.

Assistant professor Sawatree Suksri, the professor of Faculty of Law of Thammasat University commented on Facebook that the students were not at fault and the authorities must react carefully because the students had the right to prosecute them.

Teachers' Day is an annual ceremony held in the first Thursday of June, at the beginning of new semester. Every school has to hold the ceremony for the students to pay respect to their teachers and students traditionally create pedestal trays to respect and express their gratitude to teachers.

This year a lot of pedestal trays were designed to express political views.