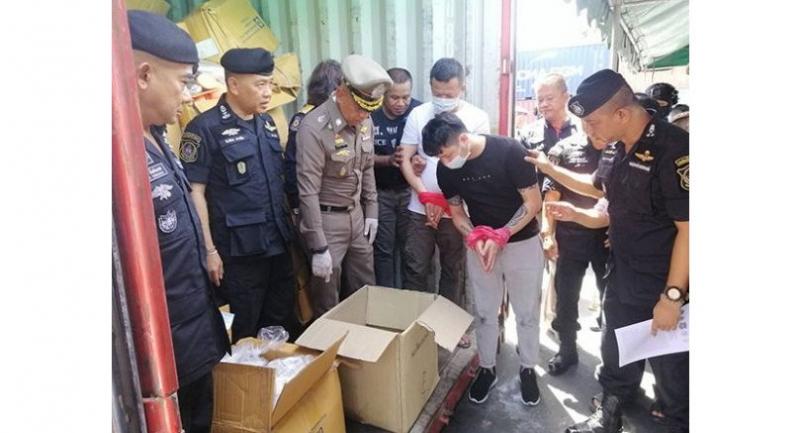 The authorities have managed to intercept a container carrying a tonne of crystal methamphetamine or “ice” worth close to Bt2 billion before it could leave the country.

They also arrested two Thai nationals and two Chinese men in connection with the haul.

The two Thais and Huang were nabbed at a container yard in Chon Buri’s Sri Racha district on Saturday, while Zhou was tracked down to his condo in Bangkok’s Huai Kwang district.

“The arresting officers were responding to a tipoff that a transnational drugtrafficking ring was preparing to hide illicit drugs in a cargo container, and investigation brought the team to the yard,” Chalermkiat said, adding that haul was meant to go to the Philippines.

The container was found stuffed with 612 boxes, 34 of which were filled with the drug disguised to look like tea bags, while the remaining boxes carried shoes.

The four suspects have been charged with having narcotics in their possession with the intention to sell and have been handed over to the Narcotics Suppression Division for legal action.

This crackdown is part of the authorities’ efforts to tackle drug problems. At present, most prisons in the country house inmates held on drugrelated charges.