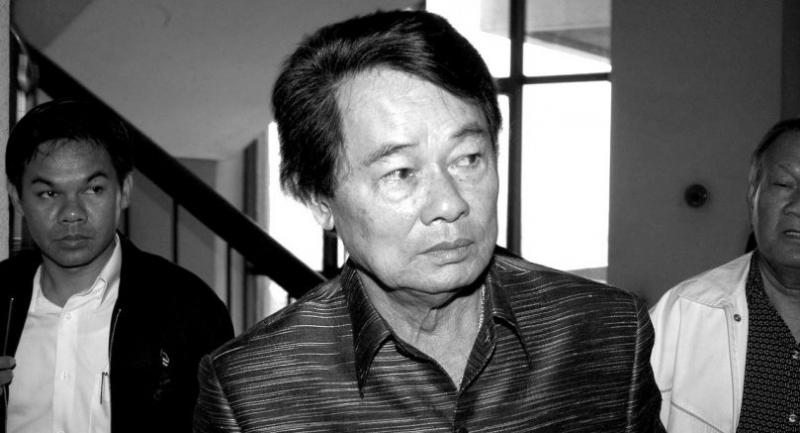 Somchai Khunpluem, better known as Kamnan Poh or the “godfather of Chon Buri” who brought prosperity and development to the eastern province but was sentenced to two jail terms, succumbed to cancer early Monday, his family said. He was 82.

Somchai, former mayor of Tambon Saensuk Municipality, died at 3am in Chon Buri hospital. He was released from jail on December 14, 2017 due to his illness.

Narongchai Khunpluem, Somchai’s youngest son and the present mayor of Tambon Saensuk Municipality, posted the message “I love you, dad. #RIP” on his Facebook wall.

Somchai was born on September 30, 1937. He was a well-known politician and businessman in Chon Buri and was perceived as the godfather of the east coast who brought prosperity and development to the tourist town of Bang Saen. He was also perceived as an influential person who supported several politicians from eastern provinces.

He was sentenced to five years and four months in jail and the seizure of his assets for corruption in a land case. He was also sentenced to 25 years in jail for masterminding the murder of Prayoon Sitthichote, another influential person and his rival. After the verdicts he fled his home but was captured in Bangkok on January 30, 2013.

Somchai was born to Charnchai and Thuam Khunpluem. His father was a village head in Tambon Saensuk in Chon Buri’s Muang district. His mother worked as a pork vendor in the market and went on to own a slaughterhouse.

Somchai left Wat Klang Don School after completing Grade 4 and worked as a bus conductor on the Bang Saen-Sri Racha-Chon Buri route before being promoted to driver.

After buying his own fishing boat, Somchai became friendly with a French tourist, who had an oil trading business in Cambodia. Through his connections with the French businessman, Somcchai got a license to fish in Cambodian waters. He run a successful fishing business for a few years but quit when oil prices soared.

He later went into digging and supplying gravel and soil for road fill. The success of this business allowed Somchai to expand his business empire to include the construction business, liquor sales, hotels, and real estate development. His wealth and influence in Bang Saen and Pattaya also allowed him to support his sons in their bids to become politicians..

Somchai and his wife Satil had four sons and one daughter, most of whom went on to become national and local politicians.

Somchai’s third child was a daughter the couple called Jiraporn.

His youngest son Narongchai Khunpluem, is now the mayor of Tambon Saensuk Municipality.

On January 30, 2013, Somchai was arrested by Crime Suppression Division police in his car at the Lat Krabang toll gate while travelling on the outbound motorway after using the name of Kim Sae-tang to receive treatment at the Samitivej Srinakarin Hospital.

After his arrest, he was sent to jail to serve the two outstanding jail terms, one for corruption in the Khao Mai Kaew’s land purchase by Tambon Saensuk Municipality when he was the mayor and the other for murder.

On December 14, 2017, the Corrections Department sought permission from Deputy Prime Minister and Justice Minister ACM Prajin Juntong to release him from jail on humanitarian grounds because he was suffering from stage 4 cancer and was over 70 years old.

At 3 am on Monday, his colourful life as a poor bus conductor who went on to become the godfather of the east coast finally came to an end.