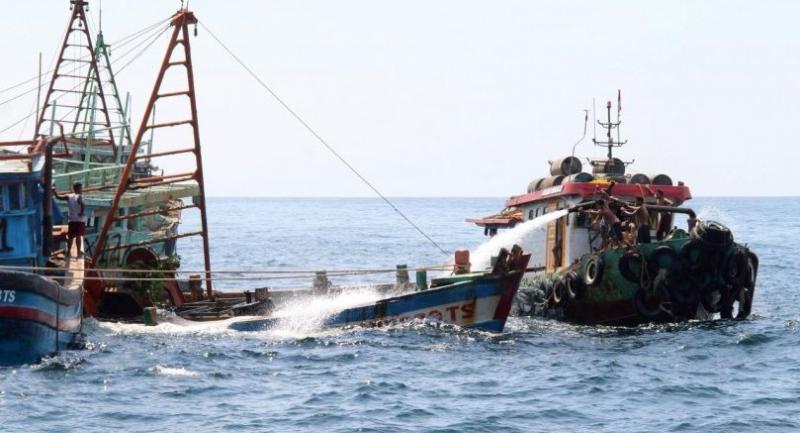 The contentious South China Sea is not only under the threat of militarisation but also to its environment, with the potential to affect a hundred million regional fish-dependent folks, according to academics.

Participants at “The Code of Conduct on the South China Sea: Military and Marine Resources in 2019” panel at Thammasat University on Thursday said that Asean, many of whose members are at loggerheads with China over territorial disputes, also needed to mull over the many aspects for creating a legally binding code of conduct.

Li Nan from the East Asian Institute at the National University Singapore noted Beijing had taken several militaristic actions in the disputed area.

Examples included an aircraft-carrier centred operation being combined with the deployment of submarines to support and protect each other.

On the controversial reef fortifications, Li said they had three purposes – supporting the naval operations such as the harbour construction at Spratly islands, serving as a surveillance and reconnaissance outpost to enhance domain awareness, and as a communication platform in the area.

On strategy, Li said China’s People Liberation Army’s navy manpower had increased from 20,000 to 100,000 in order to protect its interests in the South China Sea and other fronts such as its grand policy, the Belt and Road Initiative (BRI). The defence budget also had risen to $175 billion (Bt5.39 trillion), only three times less than the globe-covering US defence budget of $700 billion (Bt21.56 trillion), he said.

Carmen Ablan-Lagman from the Centre for Natural Sciences and Environmental Research at De La Salle University in the Philippines, described the security issue from a fisheries point of view. Data showed that Asean and East Asian people consumed more protein from fish than those of Brazil, the UK, Germany or even the US.

The fishery in the South China Sea had exceeded its point of sustainability since 1970 due to overexploitation and an over-capacity fishery, she said.

As climate change continued to affect the sea temperature, local fish would be driven away to cooler places. Pollution also played a part in fish survivability, said Ablan-Lagman. Thus, without any regional fisheries management, hundred of millions of coastal people would see their traditional diet impacted.

The South China Sea holds much of significant value, reaching beyond the well-known geopolitical struggle for territory among countries in the region including China, the Philippines, Vietnam, Brunei, Malaysia and Taiwan. The sea is also a huge source of seafood and has crude oil, and sees more than 30 per cent of global trade pass through it

The Asean countries and China have for two decades been working on a code of conduct to control the behaviour of the states which border on the sea, with the first draft text expected for reading by the end of this year under the Thai chairmanship. All parties agree that the 1982 UN Convention on the Law of Sea (UNCLOS) guaranteeing the freedom of navigation and flights will be respected.