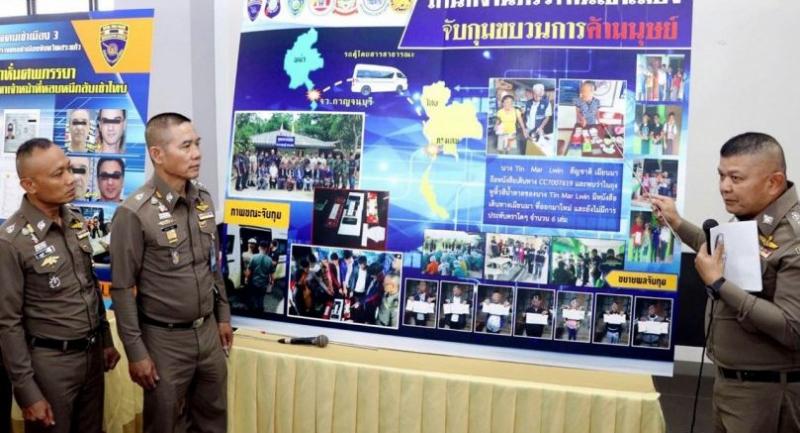 THE IMMIGRATION Bureau has intensified its crackdown on human-trafficking networks, which has resulted in the arrests of several alleged smugglers, Immigration Police chief Pol Lt-General Sompong Chingduang told the press yesterday.

She was nabbed while travelling on a public bus to Muang Kanchanaburi district, and has reportedly confessed to smuggling seven illegal immigrants through Sangkhla Buri before bringing them to Bangkok for work.

Upon searching her room, police found evidence showing that she supplied illegal workers to a factory in Bangkok’s Bang Khunthien district, Sompong said.

Police then apprehended six other suspects at the factory, who claimed they had paid the woman Bt1,500 for each worker.

Tinh Win was charged with human trafficking, while the seven illegal migrants have been put under the care of a shelter in Nonthaburi province.

Sompong said screening at the Sai Yok checkpoint had also led to the arrest of Tawee Tasawang, 57, and three other suspects for allegedly trying to smuggle 211 kilograms of methamphethamine or “ice”.

The suspects, riding in two pickups, were arrested when they tried to run away after being ordered to stop for a search. Sompong said the drugs were found in hidden compartments in the vehicles, and the suspects claimed a man from Myanmar, known only as Aye, had given them the narcotics.

Separately, the immigration chief said an Israeli man convicted for dismembering his wife and dumping her body parts in 2004 has been caught in Sa Kaew’s Aranyaprathet district.

Eli Cohen, now 49, was sentenced to life in prison in December 2004, but was released under royal pardon after seven years and deported back to his homeland.

At the time of his latest arrest, Sompong said, Cohen’s name was different in his passport.

The immigration police chief said Cohen confessed he had changed his name so he could return to Thailand, after having failed four times under his old name.

Cohen said his love for Thailand brought him back and also because he feared for his life in Israel, Sompong said. The immigration chief said Cohen will be deported soon.