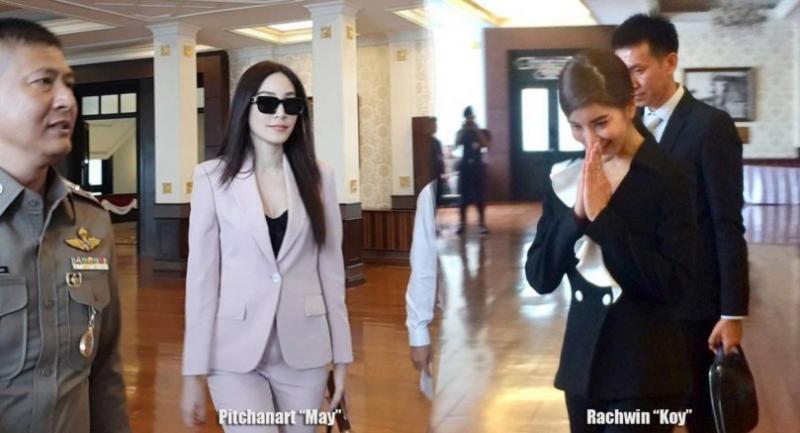 Actresses Rachwin “Koy” Wongviriya and Pitchanart “May” Sakhakorn on Tuesday acknowledged the charges against them linked to their roles in promoting unlicensed and substandard Magic Skin care and food supplements.

National police deputy chief General Weerachai Songmetta said Pitchanart had been charged for a violation of the Cosmetics Act of 2015, an offence punishable with a maximum one year in prison and/or a maximum fine of Bt100,000.

Police had opted to send her to pay the fine at the Food and Drug Administration, he said.

Rachwin, however, was charged for violating the Food Act of 1979 by falsely advertising the usefulness, quality or properties of food to create deception, an offence punishable with a maximum three-year imprisonment and/or a maximum fine of Bt30,000.

Police therefore sent her to Phra Nakhon Tai District Court in the afternoon for consideration of what punishment she should receive, Weerachai said.

Actor Chutavuth “March” Pattarakampol and two other actresses, Sutatta “Pun-pun” Udomsilp and Esther Supreeleela, will hear the charges against them in connection with the case on July 8 at the Royal Thai Police head office, he added.

Pitchanart said she had confessed to the wrongdoing, which she “committed because she didn’t fully understanding the situation, nor the consequences”, and would regard this as a key lesson in her working life.

Rachwin thanked the media for their presence, but declined to make any remarks about the case.