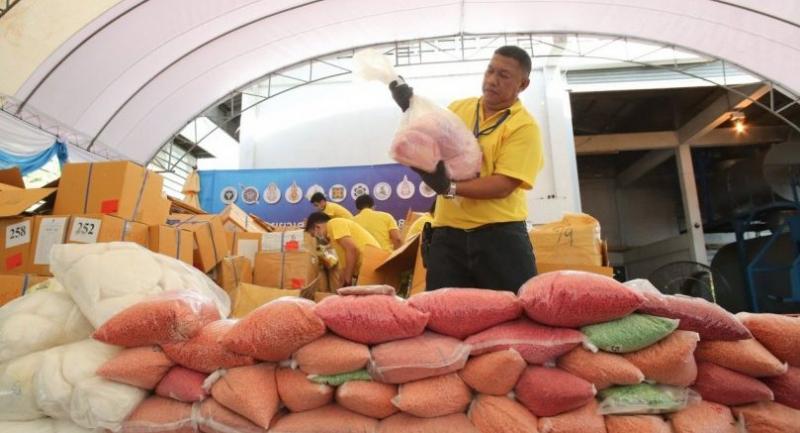 The ceremony was held at at the Utilities and Environment Management Office of the Bang Pa-in Industrial estate and chaired by FDA secretary general Doctor Tharet Krutnairawiwong.

This marks the 49th incineration of seized drugs by the FDA since 1997. The drugs disposal ceremony was witnessed by foreign envoys and representatives of government and associated private agencies, including the Royal Thai Police.

The FDA chief said that the destroyed drugs came from 6,910 separate cases and were worth about Bt20 billion. They broke down to 12.369 tonnes of meth, or about 137 million meth pills, 3.443 tonnes of crystal meth, 143kg of ecstasy pills, 44kg of cocaine, 258kg of opium and 193kg of other miscellaneous drugs.

The the FDA chief added that the burning process was carried out using pyrolytic incineration at temperatures of 800C.

He said the FDA would hold a further drug disposal ceremony on July 5. Since 1997, the FDA has held incinerations of seized drugs on 49 separate occasions, burning 145.243 tonnes of drugs worth Bt217.39 billion. Methamphetamine and crystal meth consisted of the majority of drugs destroyed, with 90.521 tonnes of them incinerated, followed by 29.258 tonnes of opium, 25.27 tonnes of heroin, and 193 kgs of ecstasy.

The FDA chief said in the speech that the Public Health Ministry would also rehabilitate drug addicts after their arrest. This year, the ministry aims at providing drug rehabilitation to 219,275 addicts, breaking down into 136,725 who voluntarily agree to receive rehabilitation, 56,550 who are ordered to and 26,000 prison inmates.