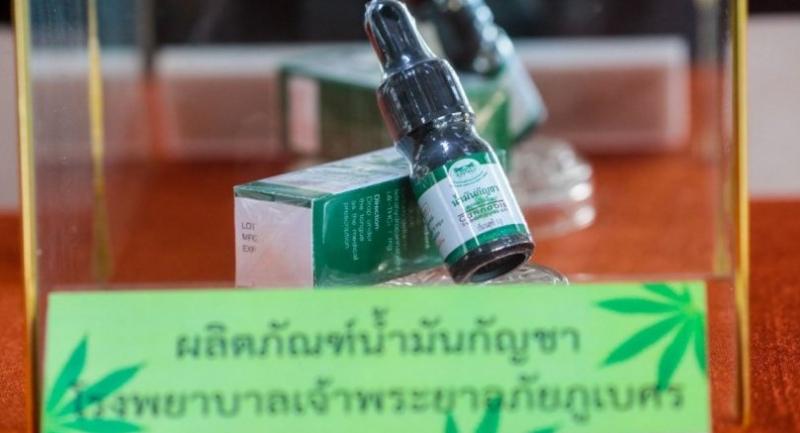 Cannabinoid was distributed to patients at Abhaibhubejhr on Monday, coinciding with the hospital’s 78th anniversary. Photos courtesy of Wason Wanichakorn.

Chao Phraya Abhaibhubejhr Hospital has announced that its medical cannabis clinic, which opened on Monday, will not accept any more patients as the clinic had reached its limit.

The hospital, renowned for traditional medicine based treatment, was endorsed by the Public Health Ministry to distribute medical cannabis to patients as part of the ministry’s effort to come up with a medical cannabis model for hospitals nationwide.

It started to distribute cannabinoid to patients with epilepsy and Parkinson’s disease on Monday and around 10 patients were screened and selected based on the severity of their symptoms.

The hospital followed the guideline for special cases laid by the Food and Drug Administration and the amended Narcotics Drugs law.

“I hope it would be the beginning of our medical cannabis treatment which would also be equipped with systematic follow-ups,“ said Dr Namphol Danphipat, the hospital’s director.

As a model, Abhaibhubejhr would also explore growing marijuana to achieve the best breeding practice as well as medical extraction, expertise the hospital has long built up and well known.

Cannabis is known to respond to different diseases so it remains an area for medical practitioners to explore.

So far, it is widely accepted that it is responsive to epilepsy and Parkinson's, as well as neuropathic pain and pain relief for the fourth stage of cancers.

The hospital is working on extracting implicated marijuana provided by the Office of Narcotics Control Board so that it can acquire more cannabinoid, this time for pain relief of cancer following the high THC concentration responding to the disease.

This can be expected within two months, said Dr Supaporn Pitiporn, chair of the Strategic Thai Herbal and Traditional Medicine at the hospital, a Thai traditional medicine pioneer.

The hospital is also experimenting with growing marijuana in a closed system as well as some other methods in an attempt to find the best practice for growth. It plans to distribute the knowledge with standard sets for planters nationwide.

“During the past few months that we have taken cannabis back to our medical area, I can also see efforts that everyone involved have invested in order for cannabis to resettle in our culture and start to move forward again.

“Cannabis has long been with Thai society and we are part of bringing all scattered parts of it back for use and will be part of distributing and sharing knowledge to the society,” said Supaporn.