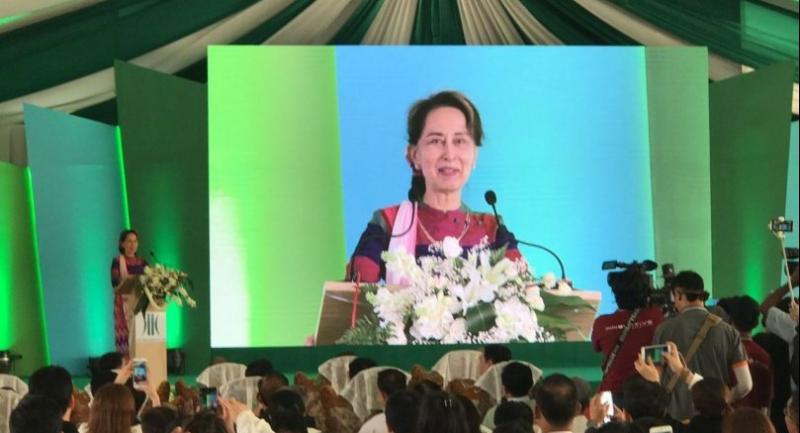 The Minbo Solar Power Plant project, hailed as a triumph by some Myanmar people and the Thai investors who supported this first phase, was celebrated with an opening ceremony on Thursday.

The plant is Myanmar's first renewable energy and solar power project, and viewed by many as a mark of pride for the nation. The opening event attracted representatives from leading financial institutions, investors, distinguished guests from China, Japan and Myanmar and media from Thailand.

Minbu Solar Power Plant was designed to be efficient and conforms to international standards. The first phase of the project will result in a power generation capacity of 50 MWDC, with a final target of 220MWDC upon completion and will cover 2,115 rai (836 hectares) leased from the government and a private Myanmar company. Electricity from the plant will be sold to the Myanmar’s Electric Power Generation Enterprise (EPGE) under the Ministry of Electricity and Energy to satisfy up to 350,000,000 kWh of power demand per year, equivalent to power usage by 200,000 households. The project’s success will push Myanmar forward and serve as both a new paradigm and a point of pride for the nation, according to a release yesterday.

According to Aung Thiha, CEO of Green Earth Power (Thailand) Co Ltd and GEP (Myanmar) Co Ltd or GEP, the project had received the government’s full support. As many of Myanmar’s people are still in need of power, this solar power plant is sure to better the lives of many, said the CEO.

“The success of this endeavor will also guarantee that GEP will be able to continue to undertake development projects into the future. As a citizen of Myanmar myself and as a pioneer of clean energy in the country, I am immensely grateful for all the support this project has received from investors, financial institutions and our partners in Thailand and other countries,” said Aung Thiha.