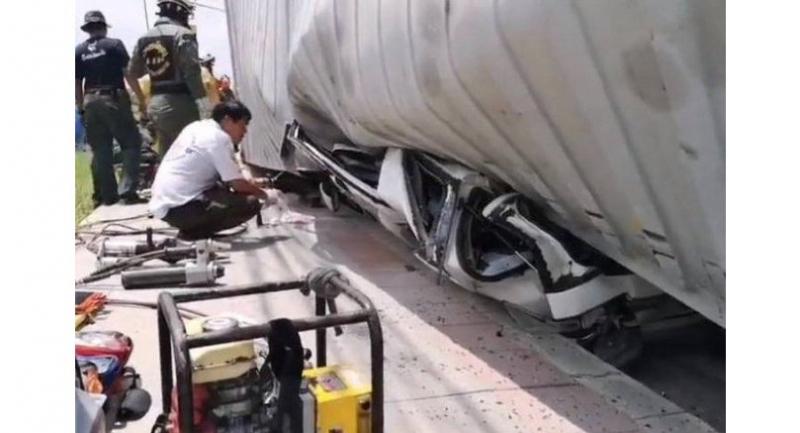 Cargo trucks that fail to fasten shipping containers' twist locks before going on the road will be fined a maximum Bt50,000 from September 1, the Department of Land Transport (DLT) said.

The DLT regulation in the use of twist locks, which was announced on Wednesday, is to prevent accidents where cargo trucks' containers dislodge and fall onto others, resulting in injuries and deaths or property damage.

On Monday, a 34-year-old Thai woman was crushed and killed by a fallen container on Ayutthaya roadside. The truck driver claimed that a car cut in front of his vehicle and he swerved to the left to avoid it, causing the container to fall on the victim who was standing nearby.

He said the federation had proposed that the DLT issues a regulation to require a cargo truck to be installed with a light signal system to warn other motorists of a hazard if the truck has not used a twist lock.

Out of the country's one million cargo trucks registered with the authorities, 200,000 trucks were under the federation, he said.

He urged that all trucks apply the light signal system - which required approximately Bt1,000 for installation - so police could notice offenders and impose fines.

Factory owners and industrial estates could participate by not allowing trucks to leave their premises if they do not have twist locks, while the authority could impose a harsher fine on the truck owners and seize the truck drivers' driving licence.

Federation adviser Thongyoo Khongkhan, who owns a 30-truck fleet, said some truck drivers who weren't the federation's members mistakenly believed that the use of twist locks would cause more damage to the truck and containers in an accident.

Thongyoo welcome the stricter action against those who failed to fasten the twist locks.

He said the action came after several previous attempts by related authorities to ensure all cargo trucks had their containers locked for better road safety, such as the Expressway Authority of Thailand which currently imposed a Bt1,000 fine on such violators.