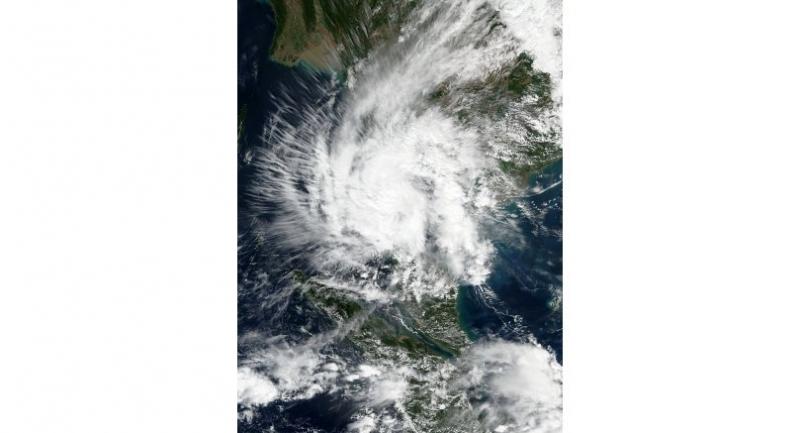 The sattleite image of Tropical Storm Pabuk over Gulf of Thailand.

WITH GLOBAL TEMPERATURES EXPECTED TO RISE BY 3 DEGREES CELSIUS, PEOPLE FROM SUB-SAHARAN AFRICA TO THE LOW-LYING PLAINS OF THAILAND REMAIN IN FEAR OF THEIR FUTURE

PEOPLE ACROSS the globe, especially the poor and the marginalised, are already suffering from the impact of climate change, and as temperatures continue to rise it is becoming tougher for them to survive.

Here are two vivid examples of how climate change is jeopardising food security, destabilising people’s way of life and making them vulnerable to natural disasters. In the windswept grasslands at the edge of Ngorongoro Crater, Sinja Alarakara, a Masai tribesman from a nearby village leads a herd of cattle to graze.

Around 300 Masai villagers and thousands of cattle and goats live within the perimeter of the Unesco-protected Ngorongoro Conservation Area in Tanzania’s northeast. This is the only place in the country where people are allowed to live in harmony with wildlife, but the peaceful life of the Masai people is facing several threats.

Even though the pasture grounds around Ngorongoro Crater may appear unchanged since Alarakara’s forefathers led cattle to graze hundreds of years ago, a difference is becoming evident.

“Over the past three years, we have received noticeably less rainfall than usual, which is making it difficult for us to find clean water for ourselves and for our cattle. We now have to travel large distances to find water,” he said.

“Diminishing rainfall is also contributing to fewer pasture areas for our cattle, forcing us to take them deeper into the forest, where they are attacked by wild animals due to limited grazing areas.”

He said his cattle are having to compete with wildebeests, zebras and antelopes for fresh grass, and are often hunted by lions and hyena.

“Conflicts with wildlife are souring our relations with park rangers, and now we are beginning to fear that we will be forced out of our ancestral land,” he said.

In order to avoid these problems, he said, the Masai have started travelling to Karatu, a town 40 kilometres away, to buy maize as a supplementary feed for their cattle. However, this is turning out to be very expensive, especially since they earn very little from tourists that visit the area.

The Intergovernmental Panel on Climate Change and other scientific reports warn that aridity is entrenched in this part of Africa, and they estimate that the projected 3 degrees Celsius rise in global temperatures will push rains away from Sub-Saharan Africa, causing deserts to expand and swallow the lush savannah.

“We the Masai are pastoralists and our cattle are not just a food source and asset, but also core to our cultural identity. But with the pressures of climate change worsening, I’m very fearful about our future,” he added. “Before the storm made landfall, the level of water in the Bay of Bangkok [northernmost Gulf of Thailand] rose significantly and flooded many coastal provinces, including Samut Sakhon,” Amporn recalled.

“Though nobody was harmed, high floodwaters caused extensive damage along the shore. Luckily for us, we were protected by the dense patch of mangrove in front of the Samut Sakhon Provincial Marine and Coastal Resources Conservation Centre.”

Pabuk, which made landfall in Nakhon Si Thammarat province in January, is the most recent storm to cause widespread devastation throughout the Gulf of Thailand, but not the first.

Amporn recounted that before Pabuk, there was Typhoon Gay in 1989 and Tropical Storm Linda in 1997, which caused even greater damage and killed thousands of people along the coast. High storm surges have also permanently submerged large swathes of coastal land in the provinces of Samut Sakhon, Samut Songkram and Samut Prakan.

According to the Marine and Coastal Resources Department, the northern part of the Gulf is suffering the worst coastal erosion in the country, with almost the entire 65.5-kilometre shoreline eroding at 5 to 25 metres per year. The Mineral Resources Department reported that more than 11,188 rai of land has been lost to sea, causing financial damage exceeding Bt11.18 billion and displacing up to 1,200 families.

With global warming triggering extreme weather and more powerful storms, Amporn said her area faces a greater danger than ever before of being swallowed by the sea.

“We live in the flat, low-lying coastal plain, which is most sensitive to storms and rising sea levels. If the global temperatures continue to rise, we will be the first victims of climate change in Thailand,” she said.

“At the rate sea levels are rising, I don’t know how much longer we will be above water.”