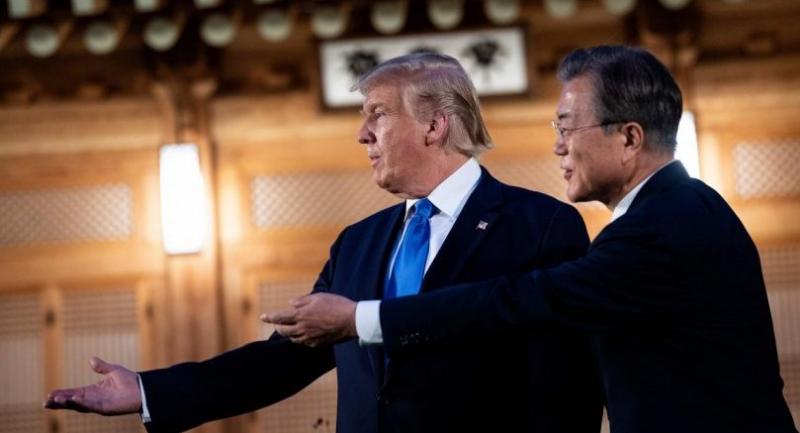 US President Donald Trump and South Korea's President Moon Jae-in stand together before a working dinner at the tea house on the grounds of the presidential Blue House in Seoul on June 29, 2019./AFP

South Korea's President Moon Jae-in sought to appeal to Donald Trump's personal preferences on Saturday with a US steak dinner and a guest list including a star woman golfer.

The US president is known for his love of the sport and his simple culinary tastes -- he likes his meat well-done.

In the past he has bonded with Shinzo Abe, the conservative prime minister of South Korea's neighbour Japan -- who Trump has regularly described as his friend -- over burgers and several rounds on the course.

The relationship between Trump and Moon -- also the leader of a country in a security alliance with the US, but a somewhat reserved former human rights lawyer -- is nothing like as close.

But as Trump arrived in Seoul ahead of a trip to the Demilitarized Zone Sunday and a possible third meeting with the North's Kim Jong Un, the South's presidential Blue House appeared to have crafted a dinner to appeal to the guest of honour's particular tastes.

The main dish was a sirloin steak made of US beef, accompanied by bulgogi sauce, pickled garlic leaves and other side dishes.

And as well as the 12 cold Korean starters on the official menu -- among them steamed sea urchin with tofu, and pan-fried mung beans -- mini-hamburgers were served, Blue House officials said.

Serving western-style food along with Korean dishes symbolised the "collaboration and harmony" between the South and the US, Seoul's presidential office said.

When Trump last visited in 2017, the Blue House prepared a menu infused with "local, traditional flavour" and featuring a beef rib dish accompanied by a gravy using a 360-year-old soy sauce.

Then, Seoul also sought to score a diplomatic point by featuring a prawn caught in the waters off Dokdo, disputed islands controlled by the South but claimed by Japan.

In another diplomatic jab, Moon's office invited a former wartime sex slave for Japanese soldiers to that state dinner, leading Tokyo to call the move "inappropriate".

This time the guests at the meal -- eaten in a traditional-style building in the grounds of the presidential complex in Seoul -- included retired star golfer Pak Se-ri, who has five majors to her name.

Trump spoke at length with her, saying at one point: "She's gonna be my partner."

South Korea dominates the women's game globally -- and Trump highlighted the success of the country's players when he spoke to its parliament two years ago.

Sparkling water was provided as Trump does not drink, the Blue House said, and a separate Kosher meal was provided for his daughter and advisor Ivanka and her husband Jared Kushner, who are Jewish.

Also among the guests were members of K-pop band EXO -- Ivanka's children are known to be fans -- who handed the President and his daughter signed albums.

Trump is known to enjoy fast food. But Kim Hyun-wook, a professor at the Korea National Diplomatic Academy, said that had the meal been a more formal occasion such as a full state banquet, serving burgers as the main dish would be "improper in any diplomatic setting".