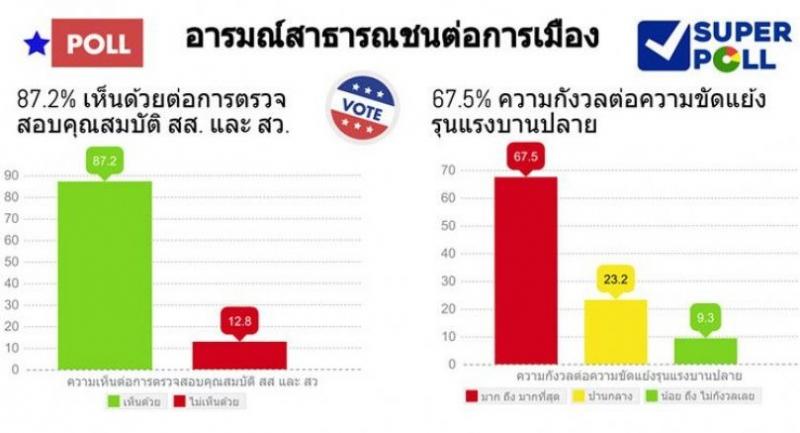 Most respondents to a surveyed conducted this past week said they were “extremely fed up” with Thai politics in the wake of a series of negative news reports about politicians and parties.

More than 92 per cent of the 1,673 respondents to the Super Poll opinion survey, the results of which were released on Sunday, said they’d grown “very tired” of the situation.

By comparison, 7.6 per cent said they considered the latest political jousting “fun” and not “boring”.

More than 67 per cent of respondents said they were “very worried” or “very much worried” that post-election political bickering between rival camps will worsen.

The chief concern stemmed from accusations that MPs in both the coalition government and the opposition retained shares in media companies, which is against the law.

Just over 23 per cent described themselves as “moderately concerned” about this issue, while 9.3 per cent were “slightly worried” or “not worried at all”.

More than 87 per cent of respondents agreed that government and opposition MPs as well as senators should be subjected to examinations to determine whether they are qualified for office and do not hold shares in media businesses.

Asked whether Prime Minister Prayut Chan-o-cha should be named leader of the main coalition partner, the Phalang Pracharath Party, 59.5 per cent said no and 40.5 per cent said yes.

The survey, conducted between June 20 and 29, covered residents in all regions of the country.