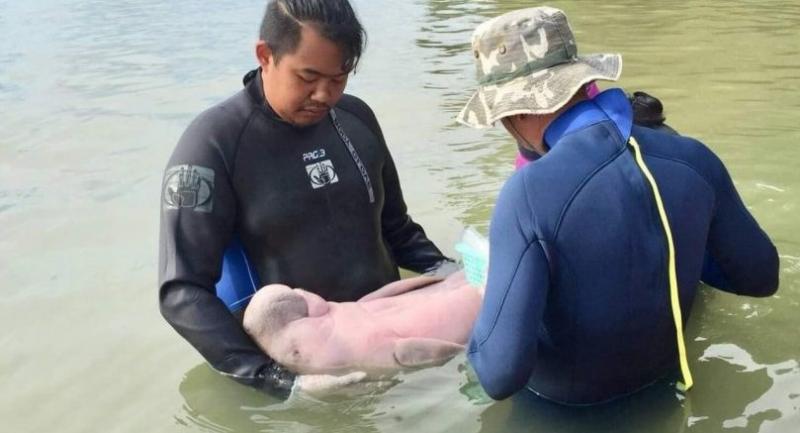 Mariam, the first baby dugong in Thailand to have people serve as its nannies in a natural environment at Koh Libong in Trang province, has learnt to recognise and to swim in both high and low tides, the Koh Libong Wildlife Sanctuary head, Chaipreuk Weerapong, said on Monday.

Chaipreuk cited the improvement, noted in a report by a team of sanctuary officials along with the local authorities guarding the Duyong Bay area where the orphaned baby dugong was staying.

The veterinarian team, officials from the wildlife sanctuary and volunteers are continuing to feed Mariam with at least 3,000 millilitres of milk daily, while also taking it to swim and leading it to a field of sea grass so it could teach itself to eat the grass. On Sunday, Mariam drank 3,220 millilitres of milk and ate 200 grams of sea grass.

The six-month-old Mariam became an internet sensation and the new face of sea conservation, after it was rescued in Krabi on April 29 after it was washed ashore in a weak condition.

She was expected to be under officials’ care for at least another 12 months before quitting the milk diet and living on her own in the sea.

The Department of Marine and Coastal Resources (DMCR) is prepared an around-the-clock live broadcast of the life of Mariam for early this month via the department's Facebook page. The broadcast aims to cater to the Thai public’s lasting interest in Mariam, boost public awareness of the extinction risks of some 300 endangered dugongs in Thai waters and promote learning about dugong care.