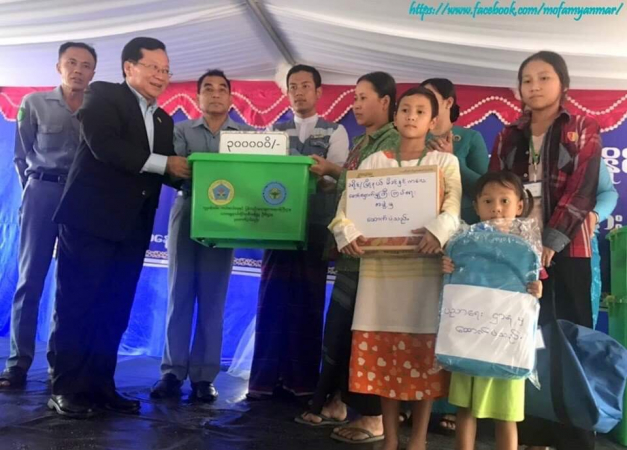 A Myanmar official provides 300,000 kyats and necessary aid to a family of Myanmar returnees on July 1. Photo courtesy of MOFA Myanmar

By Khine Kyaw The Nation Yangon

A total of 315 refugees from Myanmar are to return to their homeland this week after staying at refugee camps in Thailand for up to decades, senior officials say.

Aung Kyaw Zan, deputy permanent secretary at the Ministry of Foreign Affairs (MOFA), told The Nation on Tuesday that Myanmar is now facilitating the return of 315 refugees who wished to voluntarily return from Thailand to southeast Myanmar as the fourth group in three years.

“We started this movement yesterday (July 1) and will be accepting Myanmar refugees until tomorrow,” he said, adding that all the returnees are verified Myanmar nationals who indicated their wish to return.

“Yesterday, we welcomed back 157 refugees from three refugee camps in Thailand. All of them were brought to Kyauk Lone Gyi Reception Centre in Myawaddy through Thai-Myanmar Friendship Bridge No 1,” he said.

Departing from six refugee camps on the Myanmar-Thai border and crossing through Kayin and Kayah states, the returnees were welcomed by the Myanmar Embassy in Thailand, Kayin State government, members of parliament and representatives of line ministries.

“We will help the returnees to receive immigration support and civil documentation. Then, we will help them to return to their native towns in nine states and regions,” Aung Kyaw Zan pledged.

The returnees will receive financial support and necessary household supplies once they arrive, and the issuing of national registration cards and household list Form-10 will be done step by step.

“Once they resettle in their hometowns, state and regional governments will provide them with support in education and health,” he said.

“This time, the majority of the returnees will come through Myawady and Me-se while Htee Khee will receive just a few of them,” he said.

“This is the fourth movement under the bilateral cooperation mechanism. We started this movement three years ago and have accepted around 900 returnees so far. We will receive more returnees over the three days – in Me-se and Htee Khee today and in Myawady tomorrow.”

In a bid to facilitate the repatriation process, Myanmar and Thailand have established a joint working group which usually holds meetings to discuss the return of verified Myanmar nationals who lived in refugee camps in the neighbouring country for decades.

“This is another positive outcome from our bilateral meetings. Though we have not yet signed any agreement or memorandum of understanding with Thailand regarding the repatriation of Myanmar refugees, we do have an action plan and managed to do it well under the bilateral cooperation mechanism,” said Myo Thant Pe.

“No refugee was forced to return to Myanmar. All of them are eager to come back at their own will. And it is nothing to do with Myanmar migrants working in Thailand. The returnees are those who stayed in Thai refugee camps for decades,” he said.

The director general said the move followed Myanmar’s acceptance of 565 Myanmar refugees in February this year. He thought another round of bilateral meetings could be held in the next two or three months, with the fifth group of returnees potentially accepted by the end of 2019.

The United Nations Refugee Agency (UNHCR) and its partners are  supporting the move. Johan Cels, the UNHCR representative in Myanmar, lauded the government’s efforts to enable the refugees to return within a matter of months following their application.

“We have been facilitating and supporting the government-led return process since 2016. With this fourth facilitated movement, over a thousand refugees will have been supported to return home,” he said.

The returnees have received transport and initial reintegration grants, including non-food items and sanitary kits for women and girls in addition to counselling and information on the ground conditions in areas of return, according to UNHCR.