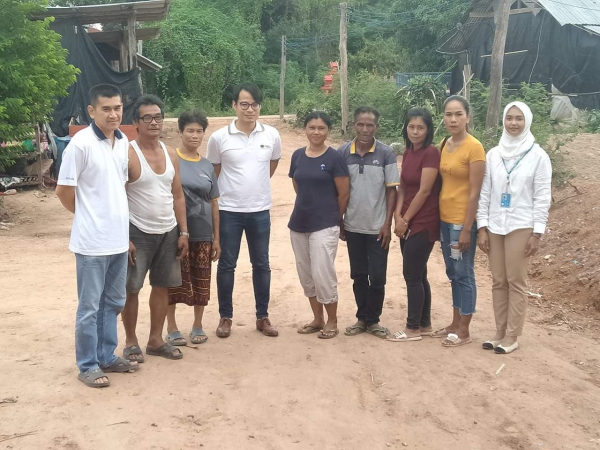 Narissara Muangklang (red shirt, third from right) who will hear the Appeals Court verdict on her fate over the national park encroachment allegation on Wednesday (July 3) on Monday poses for camera with local villagers in Chaiyaphum along with the representatives of the United Nations OHCHR (Office of the High Commissioner for Human Rights) Southeast Asia Office. Narissara is among the 14 villagers accused of such charges - 11 of whom as of Tuesday were sentenced to varied periods behind bars.

Two more villagers, accused of encroachment in Saithong National Park in Chaiyaphum province, were sent to jail by the Appeals Court on Tuesday, while the remaining three villagers are scheduled to learn their fate on Wednesday.

Although these cases got the attention of international organisations which then gave the villagers their backing, a Thai academic believed that nearly all, with the exception of one villager, would be thrown behind bars for something as simple as farming on land that had provided their families a livelihood for generations going back before the park was established in 1992.

In May and June, the Appeals Court reaffirmed the sentences for nine of the 14 defendants, although the Office of the Prime Minister and a task force is now reviewing their right to use community land. Maha Sarakham University lecturer Chainarong Setthachua, meanwhile said he believed that of the accused 14 Ban Sapwai villagers, 13 may be imprisoned while one villager had already received a suspended jail term. Many people felt the farmers had been treated unfairly, he said.

“In the past, such cases did not go to court in such large numbers, because there was a joint committee to facilitate talks among state officials and villagers, to find a common-ground solution so people can live with the forest and make a living,” he said.

“The process to prove people’s rights to use the land as they had before the announcement of national park territory is slow, while the prosecution of encroachment cases is done swiftly. The people facing accusations aren’t investors. In the past, forest encroachment cases against villagers weren’t regarded serious crimes,” he said.

Chainarong said a fundraising campaign has been launched to help the accused villagers’ families, as many defendants already had troubles at home. Defendant Suwalee Pho-ngarm is a single mum, while some other defendants have to take care of a disabled relative, had a huge debt or have served as the family breadwinners.

If these people went to jail, their families would be negatively affected, with some families perhaps torn apart with kids being sent to other relatives’ care, he said. Some defendants had prepared to grow crops in the hope of harvesting them to repay debts after being released from jail, he added.

On Monday, representatives of the Southeast Asia Office of the United Nations OHCHR (Office of the High Commissioner for Human Rights), visited Ban Sapwai to ask about the living conditions of the families of accused persons.

Meanwhile, 226 civil society organisations on Monday issued a joint statement demanding the Thai government drop all charges against the 14 land and human rights defenders in Ban Sapwai who are currently facing disproportionate imprisonment and fines exceeding Bt1 million. It called on the government to recognise their right to community land use.

The organisations also urged the government to take a rights-based approach to forest reclamation and to demonstrate its commitment to protecting the Thai people, as well as recognising the important role played by women land and human rights defenders to protect the planet.