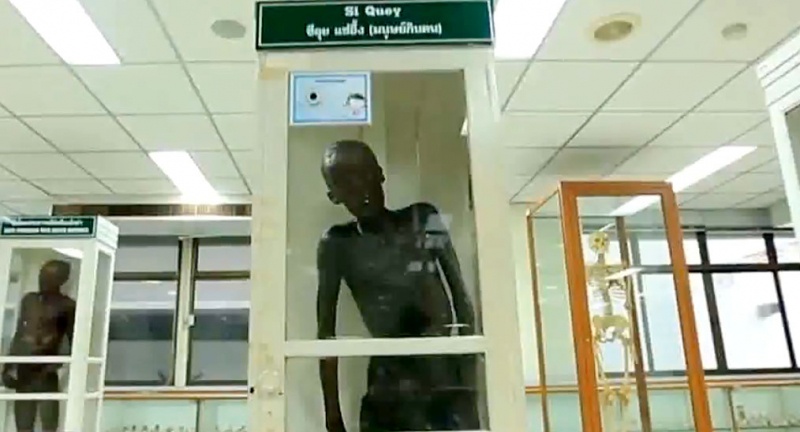 Bangkok’s Siriraj Hospital plans to reach out to the relatives of alleged Chinese serial killer Si Quey to discuss how to deal with the man’s embalmed corpse.

The hospital is due to make the announcement on Wednesday.

Si Quey’s embalmed corpse has been displayed in a glass case at Siriraj Medical Museum for six decades.

Dr Prasit Watanapa, dean of Mahidol University's Faculty of Medicine Siriraj Hospital, said on Tuesday that the hospital would wait for one month – until August 3. If none of the man’s relatives showed up, the hospital will have the legitimate right to deal with the body.

He said the hospital did not intend to make an official contact with the Chinese Embassy to assist with the search. However, the embassy was free to offer its help, he said.

He said the current measure was aimed at making its actions in keeping with the law. He said the hospital’s legal team had suggested that a relative, who can present evidence to being a blood relation – should be located to discuss how the body should be dealt with.

Following pressure from a recent online campaign to restore the convict’s human dignity, the hospital on May 31 removed the label “cannibal” from the glass case displaying Si Quey’s embalmed body. The hospital later announced that it would cremate his body.

Si Quey was reportedly a Chinese migrant who had moved to Thailand shortly after the end of World War II. He was accused of murdering seven children between 1954 and 1958 in Prachuap Khiri Khan, Nakhon Pathom, Bangkok and Rayong provinces, but he was found guilty of only one murder – in Rayong.

He was sentenced to death, and executed by a firing squad in September 1959. Siriraj Medical School sought custody of his body for autopsy studies. Later, the body was embalmed and put on display in a glass case at Siriraj Medical Museum.