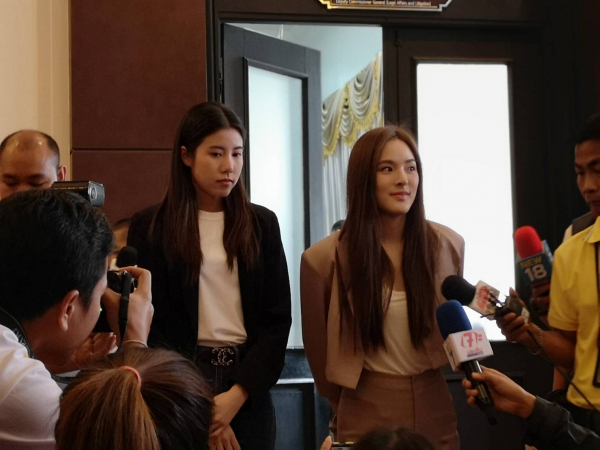 Actresses Sutatta “Pun-pun” Udomsilp and Esther Supreeleela on Thursday acknowledged the charges linked to their roles in promoting unlicensed and substandard “Magic Skin” care products and food supplements and were sent to pay a fine.

National police deputy chief General Weerachai Songmetta met the actresses at the Royal Thai Police head office to inform them of the charge of violating the Cosmetics Act 2015, an offence punishable with a maximum one-year imprisonment and/or a maximum fine of Bt100,000.

Weerachai said the two actresses confessed to the charge and so were sent to pay their fines at the Food and Drug Administration (FDA).

Actor Chutavuth “March” Pattarakampol would come hear the charges against him on July 8 , Weerachai said.

Prior to meeting police, Sutatta said that she came to hear the charges as per the police summons. “This is a lesson for me to carefully check [out] a product before providing a review. This scandal has affected many people in the Thai entertainment circle,” she said.

After meeting with police, Esther said she would pay a fine with the FDA as she was owning up to her mistake. “I will keep reminding myself to check all information thoroughly and many times so this mistake won’t happen again,” she said.

Thirteen Thai celebrities were summoned in the past month to hear charges linked to their roles in promoting unlicensed and substandard “Magic Skin” care and food supplements.

Another three celebrities – Rachwin “Koy” Wongviriya, Kanokchat “Typhoon KPN” Manyaton and Teerawat Butraya – have been accused of violating the Food Act 1979 by falsely advertising the usefulness, quality or properties of food in order to create deception. The offence is punishable with a maximum three-year imprisonment and/or a maximum Bt30,000 fine.