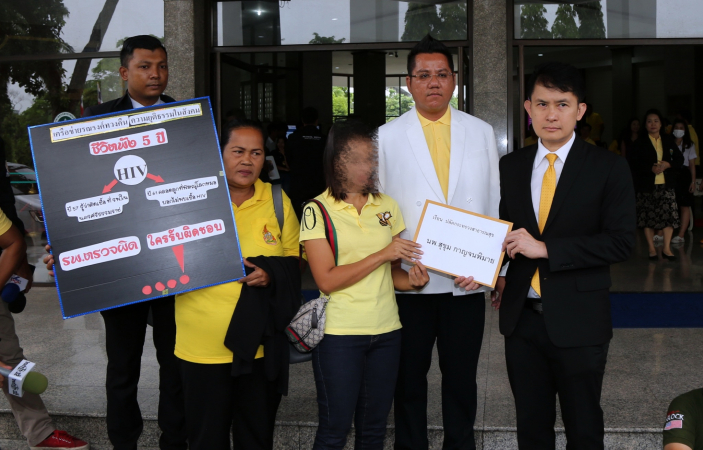 A state hospital may face a Bt30 million compensation lawsuit from a woman whose life was turned upside down because it allegedly diagnosed her inaccurately as being HIV-positive.

Maneerat Konghom, who has endured years of discrimination and social expulsion because of the wrong diagnosis, is in fact HIV-free.

“Her three children are also affected. As their mother is said to be HIV-positive, other kids don’t play with them. They have lived a bitter life,” lawyer Ronnarong Kaewpetch said on Thursday in his capacity as the chair of a network fighting for social justice.

He has stepped forward to help Maneerat, who at one point considered suicide over the false HIV-infection report.

On Thursday, he also accompanied this 31-year-old woman to the Anonymous Clinic of the Thai Red Cross Society so that she could undergo detailed blood tests. Using three methods, the tests confirmed she is free from HIV.

Maneerat was told she had caught HIV in 2014 while at a hospital in Nakhon Si Thammarat province to deliver her youngest child. From that time on, she has been shunned by others. Her oldest child refused to allow her to bring him to his school because of taunts his friends made about her reported HIV status.

In the end, she separated from her husband and moved to another province to avoid intense discrimination.

In 2018, she had a blood test at another hospital in Phitsanulok province and was told she did not have an HIV infection.

While that was good news, it also made her realise how much she had lost due to an inaccurate diagnosis.

Maneerat, therefore, has lodged complaints with many agencies. She has also denied claims that the Nakhon Si Thammarat-based hospital had already paid her Bt50,000 to settle the matter.

Ronnarong said he would help Maneerat petition the Public Health Ministry in search of an explanation.

“We will also consider a lawsuit for compensation. If this lawsuit is filed, the compensation amount should be around Bt30 million,” he said.