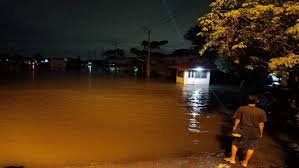 High tide on Thursday night saw sea water flowing over an embankment and flooding the homes of irrigation officials and a nearby community, officials said.

Chaiporn Promsuwan, director of the Chonlahan Phichit Irrigation Project in Samut Prakan’s Klong Dan district, stressed that the embankment did not collapse as had been reported by several news agencies and widely shared on social media.

Chaiporn said the seawater gushed into the community, which is home to 50 families of officers working on project, because of high tide and flowed over the embankment around 8pm last night. The irrigation project is building a pumping station at the spot, he added.

Chaiporn was speaking to reporters at 10.30 pm. He said the water had subsided by 20 centimeters and the project would wait for the sea water to further subside before using the two existing pumping stations to draw the water out.

He added that residents should not panic as the flood waters would eventually flow into a drainage canal.

Officials would repair the embankment today, he said.

Samut Prakan governor Chatchai Uthaiphan said he had dispatched officials to help evacuate local residents. He added the water was about one-metre high and that officials had helped relocate elderly people and children from the flooded areas. However, some people had decided to stay at their houses for fear of theft.

Officials and rescuers patrolled the community throughout the night to prevent theft.