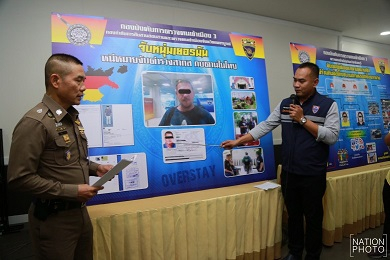 A 43-year-old German man wanted in his home country for fraud and document forgery has this week been arrested in the central province of Phetchabun, Immigration Bureau chief Pol Lt-General Sompong Chingduang said on Friday.

Following a request from their German counterparts, Thai police arrested Sacha Durst, 43, who had reportedly been laying low in Thailand since 2015, at a resort in Lom Kao district.

As he was on the run, a court in Germany ruled him guilty in absentia of fraud and document forgery and imposed a combined jail term of 2 years, 8 months and 2 weeks. It also issued an international arrest warrant for him via Interpol in April 2018.

Acting upon Interpol's request, Thai police investigated Durst’s whereabouts and found that he had opened a bar in the northeastern province of Chaiyaphum together with his Thai girlfriend.

They proceeded to arrest him and have initially charged him with overstaying his visa and using a forged document. They plan to deport and blacklist him.