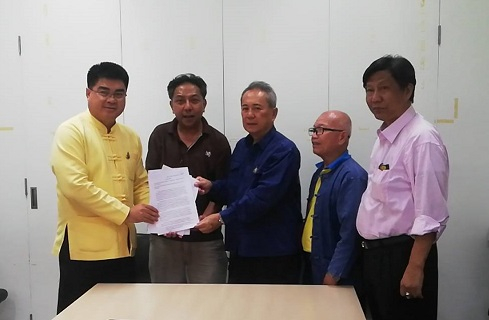 Members of an activist group present their letter of complaint to a senior official at Chiang Mai Government Complex.

An activist group has taken its campaign against the upgrading of a busy intersection in Chiang Mai to the provincial governor.

A City Hall source said the Chiang Mai Highway District Office 2, which has been tasked with overseeing the project, and Chiang Mai governor Supachai Iamsuwan would hold a press conference to address the residents’ concerns at the Chiang Mai Government Complex on July 9.

The proposed works will see the Rinkham Intersection upgraded and resurfaced as part of plans to incorporate a lane extension.

The Alliance of Hao Hak Chiang Mai (We love Chiang Mai) group has warned that if the authorities proceeded with the project, without first consulting residents, it would file a lawsuit with the Administrative Court.

The group's leader, Bannarot Buakhli, submitted the objection letter to Supachai via senior official Chucheep Pongchai at the Dhamrongtham Centre within the Chiang Mai Government Complex.

The letter also urged the provincial authority to check whether the project had followed legal procedures and was in line with the province's traffic and transport development master plan.

The group also asked that details be revealed on the construction plan and the materials proposed for use.

The group cited an engineering expert at Chiang Mai University as saying the expansion wouldn't help alleviate traffic jams; instead, it would create confusion among motorists.

Calling for the project to be suspended until its requests had been met, the group is seeking the establishment of a joint committee that includes representatives from the private sector and business owners in the adjacent Nimmanhemin Road, as well as academics, to study the impact of the project on the area's economy and community.

Rinkham Intersection is a key site for this northern province's economy and tourism and is the meeting point of Huai Kaew and Nimmanhemin roads and the Chiang Mai-Lampang Super Highway.

It is notorious for traffic jams and has described by locals as the city intersection with the longest wait for a green light.

The Highway Department, wishing to improve the intersection for better traffic flows, had asked Maya Shopping Mall to demolish its fountain-adorned plaza near the intersection and return that space by July 20 to make way for the works. It said the upgraded intersection would allow vehicles on Huai Kaew Road to make faster turns. The plan received mixed reactions among residents.