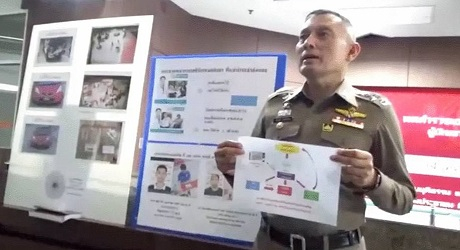 Police have summoned for questioning seven people associated with a factory in Kalasin producing weight-loss pills, including a former pharmacist who lost her licence and received a two-year suspended jail sentence over a previous medication offence.

National police deputy chief General Weerachai Songmetta said on Sunday no charges had yet been filed.

He said investigators were awaiting the results of an autopsy on the body of a 30-year-old Ang Thong woman who died last week after taking weight-loss pills she bought via the Facebook page of a “clinic”.

In the meantime, they had determined that the online clinic, whose pills came from the factory in Kalasin’s Na Mon district, had sold them to 5,619 people.

Weerachai urged the purchasers to file fraud complaints with police against the seven suspects. He said damages in the case could amount to Bt30 million.

Summoned for questioning are:

•    Anyamanee Heepkaew, who allegedly handled bank deposits worth Bt34 million in the past year;

•    A 52-year-old factory owner identified only by her nickname Toy;

•    A former pharmacist nicknamed Dear who operated the online clinic;

Weerachai said the factory, located adjacent to the owner’s home, was raided on Saturday and was found to be holding nearly 10 million pills along with production equipment.

Traces of a medicine suspected to be sibutramine were also found, possibly the remains of a larger quantity being burned to hide it from the police, he said.

Weerachai said the factory was linked to the Magic Skin brand whose owners were accused of selling unlicensed and substandard food supplements. The factory owner allegedly used to manufacture weight-loss pills in Samut Sakhon for a subsidiary of Magic Skin, he said.

Evidence was being gathered to support preliminary charges of establishing and operating a factory without a permit, selling a Category II Controlled Psychotropic Substance without a permit, producing fake medicine or food supplements, and destroying evidence.

Weerachai said he had instructed Kalasin police to look into the factory owner’s accusation that a senior state official had accepted bribes from her.

He said he would meet several of the suspects on July 10 to hear their testimony about the alleged bribery.