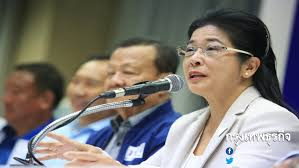 She said she thought Sompong, a Pheu Thai MP for Chiang Mai and deputy prime minister who has also held several ministerial posts, is suitable to lead the party.

Party leader Wirode Pao-in tendered his resignation on Wednesday and secretary-general Phumtham Wechayachai also announced his intention to step down, requiring the entire party’s executive board to be elected.

Sudarat said she believes the Pheu Thai is still united and all members still share the goal of developing the party so that it serves as the people’s mouthpiece, adding that this was a particularly important task when the country did not have a House of Representatives to take care of the people for five years.

She added that the Pheu Thai would be ready to adjust so as to cope with the challenges of the distorted constitution, the distorted state mechanisms and unfair rules.

“The party will also seek to help the country cope with economic slump and trade war between China and the United States as well as technological disruption,” Sudarat said.

“The change of the new executive board and reform of the party will make the Pheu Thai a tool for serving the people better and a mouthpiece for the people to speak out about their hardships. We will also look into the corruption that has accumulated during the past five years.”

The Pheu Thai is viewed as a part owned by former prime minister Thaksin Shinawat, who has been living in exile.

Young Bangkok MP Anudit Nakornthap, who is a close aide to Pheu Thai’s former prime ministerial candidate Khunying Sudarat Keyuraphan, is expected to succeed Phumtham as the next secretary general.

Sompong, who is close to Thaksin, said last week that Anudit was best suited to become Pheu Thai’s next secretary general, although there were many potential candidates.