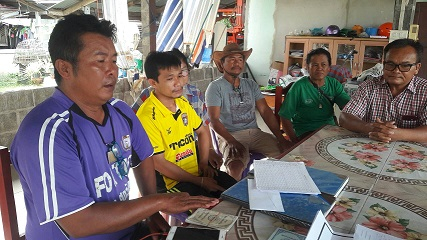 Eighty villagers in Nakhon Ratchasima’s Huai Thalaeng district want the authorities to put a repayment commitment in writing after they were allegedly cheated of Bt2.5 million by a member of the village saving group, who siphoned the money for her personal use.

Gathering at the village headman’s office of Ban Hua Saphan (Moo 5) in Tambon Hin Dad, the villagers told a reporter they had months ago filed complaints with police and with state officials at the Damrongtham Centre, but the case had not progressed much.

Nipon Pamonata, 48, said that the Ban Hua Saphan saving group was established in 1989, with the money transferred from the Huai Thalaeng community development office’s care in 2006 to the villager group to themselves manage.

A nine-strong committee, led by 51-year-old chief health promotion volunteer Noochan Marangsi, was entrusted to manage the group. Its members could deposit money in exchange for dividends – which would be paid at a rate of 9 per cent on January 25 every year – and were able to get a small loan that charged a 2 per cent monthly interest, he explained.

The group was popular as it was convenient for those not wishing to travel 10 kilometres to a city bank to do money transactions. It grew to its current 376 members who deposited a total of Bt4,255,371 – of which Bt1,470,000 was then lent to members.

Members did not receive their dividends on January 25, 2019 because Noochan was in hospital receiving treatment for breast cancer, and so they tried to replace her with another person to continue the work. They found out the following month that Bt2.5 million was missing and Noochan had reportedly confessed to having spent it for her personal use, said Nipon.

Noochan admitted the wrongdoing to a reporter, adding that her son and son-in-law are working abroad and would send the money to repay the debt.

As Noochan reportedly agreed to repay at Bt500,000 a year for five years, the villagers want the authority to formally put it in writing and to enforce the repayment by Noochan and her children. They fear that if Noochan passed away, the debt would be defaulted.