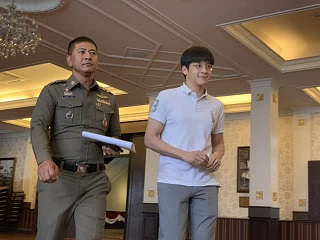 Actor Chutavuth “March” Pattarakampol on Monday confessed to violating the Cosmetics Act by pitching Magic Skin-brand product found to be unlicensed and substandard.

National police deputy chief General Weerachai Songmetta said Chutavuth would pay a fine to the Food and Drug Administration as his punishment. The offence is punishable with a prison term of up to one year and/or a maximum fine of Bt100,000.

Chutavuth publicly apologised, particularly to his fans, after an hour-long meeting with police and said he’d learned an important lesson and in future would check a product thoroughly before agreeing to promote it.

Chutavuth was the last of 13 celebrities summoned by police since last month to hear charges linked to their roles in promoting Magic Skin products, Weerachai said.

Charged with violating the Food Act by falsely advertising the usefulness, quality or properties of food to deceive were Rachwin “Koy” Wongviriya, Kanokchat “Typhoon KPN” Manyaton and Teerawat Butraya.

That offence is punishable with a maximum three years in prison and/or a fine of up to Bt30,000.