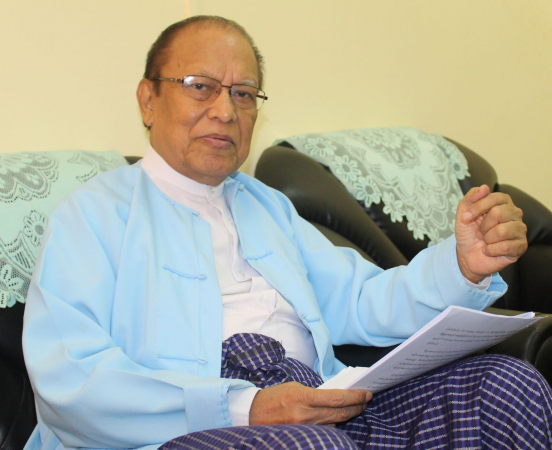 Myanmar, often accused of allowing rights violations in conflict areas, is in fact striving to foster the protection of human rights, Win Mra, chairman of the country’s National Human Rights Commission, said this week in an exclusive interview with The Nation.

He said the commission had thus far addressed half of the formal complaints received over the years, including 3,281 last year alone.

“Land disputes stand at the top of the list of the complaints we’ve received,” Mra said. “They ranged from farmland confiscation by the government or the Tatmadaw [the military] to land grabs by private companies.”

Complaints sometimes arise due to delays in processing applications for land ownership and due to perceived bias on the part of the authorities involved, he explained.

“We make field inspections and advise the ministries on restoring the land to the owners, resulting in some farmland being given back.”

Mra cited the distribution of Shwe Kyun Thar alluvial land in Labutta township in Ayeyarwady region as a particular success story. The President’s Office ordered that more than 4,160 acres of forest-reserve property be given back to farmers.

“In another case, in Sagaing region, the president, on the recommendation of the commission, directed that 88.3 acres of land be handed over to the original farmers as soon as possible,” he said.

In response to the commission’s prodding, the Defence Ministry will be giving 5,161 acres of unused land in Kanbalu, Monywa, Katha and Shwe Bo districts to the state.

Last September, 332 acres of farmland was released by the state-owned Myanmar Pharmaceutical Industrial Enterprise to be returned to farmers in Thandaungyi township in Kayin.

“These were good examples and we hope the trend will continue,” Mra said.

The commission urged the government to sign the International Covenant on Civil and Political Rights, a multilateral treaty adopted by the United Nations General Assembly, he pointed out.

“We have been raising awareness on civil and political rights in cooperation with Democracy Reporting International and the Law Faculty at the University of Paris,” he said.

The commission has done fieldwork in conflict areas including Kachin and Rakhine states to end violations of citizens’ rights amid clashes between the Tatmadaw and armed ethnic groups.

“We have asked both sides not to harm civilians living there. For security reasons, though, we cannot get access to some areas,” Mra said.

“We also cooperate with UN agencies and other international partners to restore peace and stability in Rakhine. We need to find the best possible way to reconcile the two different communities there, and this is what we are striving for.”

He said the commissioners had visited camps set up for IDP [internally displaced persons] in Kachin as well as reception centres and temporary transit camps in Rakhine in preparation for the planned repatriation of the ethnic Rohingya who fled to Bangladesh.

“The preparations to welcome back the returnees are satisfactory,” Mra said. “The authorities in charge are doing their best, in line with recommendations made by the Kofi Anan commission.”

Commissioners also visited inmates at 44 prisons and 50 detention centres from 2015 to 2018 “to observe how they’re treated”.

“We have noticed a significant rise in the number of people detained at prisons outside Yangon,” Win said. “We are aware that the number at some prisons – Myitkyina, Nyaung Shwe, Shwe Bo and Kyaing Tong, to name a few – are much higher than capacity. This may lead to unnecessary administrative problems at the prisons.”

He said the prison visits were undertaken in cooperation with the Assistance Association for Political Prisoners, a non-profit rights organisation based in Mae Sot, Thailand.

“My commission is independent, so we have no authority to release prisoners, but we always ensure that their rights are being protected,” he said.

The commission also conducted a workshop on a proposed moratorium on the death penalty pending its foreseen eventual abolition.

“Myanmar has not carried out an execution since 1988,” Mra said. “It’s considered abolitionist in practice, although the death sentence is handed to offenders in serious crimes.”

The commission has recommended prohibition of the death penalty for pregnant women, mothers with dependent children, the elderly and disabled people.

Mra said rights should never be violated in the course of doing business either, and the rights of women workers should be protected in line with UN Guiding Principles.

“Protection of human rights by business enterprises will bring good results,” he said. “Discussions on labour-related problems and challenges will bring a better understanding.”

In an effort to raise awareness about basic rights, the commission has translated the Universal Declaration of Human Rights into Burmese and 16 ethnic languages for wide distribution across the nation.

It has conducted training sessions on rights at the Central Institute of Civil Services and in nearly 30 villages in Yangon, Bago and Ayeyarwady regions.

“We are raising public awareness by training people from all walks of life, from union-level organisations to rural villages,” Mra said.