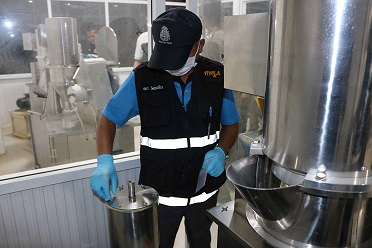 The commander of the Consumer Protection Police Division (CPPD) said on Monday an allegation that a senior officer in its ranks accepted bribes from a company accused of making dangerous weight-loss pills was three years old and had already been “dealt with”.

Pol Maj General Sitachakhet Kruwattanaset said there was nothing to the allegation made against a police lieutenant-colonel.

But national police deputy chief General Weerachai Songmetta will on Wednesday hear the accuser, the daughter of Wasapassorn Su-amnat, who operates a factory in Kalasin that was raided at the weekend.

Both mother and daughter are under investigation for their roles in the case stemming from the death early this month of a 30-year-old Ang Thong woman who had taken weight-loss pills. The factory was then said to be previously linked to the Magic Skin controversy, which involved substandard health and beauty products. Maj General Sitachakhet said he had contacted Pol Colonel Triwit Sriprapa, the deputy commander in Kalasin, about the bribery allegation.

“The bribery that Wasapassorn talked about allegedly took place in 2016 when CPPD officers arrested her and her daughter for selling a Category 4 Controlled Psychotropic Substance without a permit and related charges,” he said.

Two people arrested at that time filed a counter-complaint against a police officer, resulting in a Criminal Code action by the Office of the Public Sector Anti-Corruption Commission that is still ongoing, as is the CPPD’s own disciplinary probe, he said.

Weerachai on Monday said the daughter, a former pharmacist who was not present when the factory was raided, would on Wednesday give testimony and file a complaint about the alleged bribery in 2016.

Weerachai stressed that no evidence had yet been found of a police officer accepting bribes.

The factory raid came after the death early this month of a 30-year-old Ang Thong woman who had taken weight-loss pills she bought via the Facebook page “OBE care clinic”.

The online clinic, which had sold medicine to 5,619 people, got the pills from the factory in Kalasin’s Na Mon district.

Police searched the premises on Saturday and seized more than 15 million pills along with production equipment. They also found traces of medicine suspected to be sibutramine that had been burned, perhaps to hide it from the police.

Police summoned for questioning seven people including Wasapassorn and her daughter, nicknamed Dear, who operated the online clinic. Police are waiting for the Ang Thong woman’s autopsy result before filing charges.

So far only Wasapassorn has been charged. She is accused of producing and selling medicine and fake food products, establishing and operating a factory, and modifying a building, all without a permit. She is also charged with producing and possessing a Category II Controlled Psychotropic Substance.

Wasapassorn appeared in Kalasin Court on Monday afternoon, which granted police permission to hold her in custody for an initial 12 days. That same day, police had provincial health officials count and package 15 million pills reportedly worth at least Bt20 million, and related evidence seized at the factory and elsewhere.

Forensics officers also collected samples for lab testing to confirm the presence or absence of prohibited and harmful substances and to check for a connection to the Ang Thong woman’s sudden death.