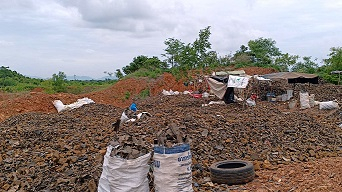 A headman in Sa Kaew province bordering Cambodia has been accused of helping operate an illegal waste site in protected forestland where a mountain of industrial and electronic waste has been dumped.

The suspect was identified by a military source who joined a 100-strong security team that inspected the 20-rai plot of conserved "Zone C" forestland in Wang Nam Yen district on Monday.

The unnamed headman stands accused of directing garbage for separating to the site but insists he is innocent.

Meanwhile Boonyeun Noicharoen, a truck driver, told officers he was hired to transport the trash from a factory in Chon Buri's Sri Racha district, the source said.

Pollution Control Department officials inspected the site on Monday and are working to determine if it is hazardous to health and the environment. Sa Kaew environmental office director Anucha Krajaisri said that piles of industrial and electronic waste were discovered at the site, which is thought to lie within the protected forest complex of Khao Chakan, Noen Sao Ae, Khlong Huai Krai and Phra Sateung. The forestland is designated "Zone C", or off-limits to industrial activity.

A Thai caretaker at the site, identified as Sathit Thoopthong, along with 40 Cambodian workers who were toiling to salvage auto parts, wiring and circuitry, were arrested for suspected violation of the Forest Act, the National Reserved Forest Act and the Groundwater Act. The latter charge stemmed from the discovery that a well had been dug at the site, Anucha said.